Enda Kenny cannot say when government will be formed

Speaking to the media ahead of an EU summit with Turkey in Brussels, Enda Kenny has conceded that he unlikely to be elected as Taoiseach when the Dáil resumes this week. Video: EU Council 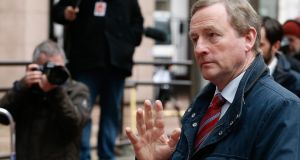 Enda Kenny arrives at an extraordinary summit of European Union leaders with Turkey in Brussels on Monday. Photograph: Laurent Dubrule/EPA

The government is considering dispatching an Irish naval vessel to the Mediterranean to assist with the refugee crisis, Taoiseach Enda Kenny has said.

Arriving in Brussels for a key EU-Turkey summit, the Taoiseach said he had discussed the issue with Defence Minister Simon Coveney on Monday morning before departing for Brussels for the leaders’ summit.

“It’s our intention to send one of our naval vessels down to the Mediterranean again, in order to help with the situation there in so far as human assistance is concerned, whether that be formally as part of the European response or on a bilateral basis will be worked out.”

Pointing out that Irish patrol ships had rescued more than 8,000 people in the Mediterranean, he said Ireland had already committed to accepting 4,000 refugees through relocation and resettlement programmes, but that the problems were “not just on the Irish side.” The European Union has struggled to implement a flagship relocation scheme launched last year in a bid to redistribute refugees across the bloc.

The Taoiseach, who is meeting his EU counterparts for the first time since the inconclusive general election on February 26th, said that while, Ireland “clearly needed a government,” he could not put a date on when a government would be formed.

“We’ve had difficulties like this before... I can’t put a date on that but I am prepared in my capacity as Taoiseach to work for the formation of a government that the government deserve and the people need.”

Asked about the vote to elect a new Taoiseach on Thursday, Mr Kenny said that “the indications are that no one will be elected on Thursday.”

“You can never predict a situation like this, but clearly the fact of the matter is that the Taoiseach is elected by the Dáil and obviously continues until that situation is changed. For me the work of government goes on. That is why I’m here today, and that’s why I will be here next week if that be so.”

Mr Kenny said that he had been updated by aid agency GOAL about the possible closing of the Bab al-Hawa border crossing in north Western Syria.

“500 trucks a month go through there with humanitarian aid of which Ireland is a main subscriber. There are one million beneficiaries involved in this crossing. If this is to close, and that seems to be imminent that would mean that another million people would want to cross the border and seek refuge into Turkey and from there into Greece. ”

On the EU-Turkey deal under discussion at today’s summit, Mr Kenny said Ireland would contribute €22 million to the programme, which would be paid in four instalments. But he warned that Turkey needed to adhere to EU standards on democracy and press freedom.

Mr Kenny said that while today’s summit was addressing the symptoms of the migration crisis it was not addressing the main cause, warning that the European Union was dealing with an “overwhelming situation.”

“All of this, all of these meetings about migration are dealing with the symptoms of a real problem, not of the main cause of that problem, which is the situation in Syria. If the Turks have difficulties with the Kurds, and the Kurds are being supported by the Americans to fight Isis and Russia and Iran support the Assad regime, and the United States and Europe support the opposition... this will continue until it is dealt with.”

He noted that, for the first time, the EU is supplying humanitarian aid within the borders of the Union. “This is a really serious problem that needs to be addressed seriously,” he said.

Today’s EU-Turkey summit, which is being attended by Turkish prime minister Ahmet Davutoglu is being seen as a crucial test of the Union’s ability to deal with a refugee crisis that has overwhelmed EU member states and has left the EU’s free movement policy in tatters.

Following weeks of backroom diplomacy, EU officials are confident that Turkey will agree to take back economic migrants who are not entitled to asylum, despite concerns about the compatibility of such a policy with international law.

From the Turkish perspective, securing a commitment from the EU to speed up talks on visa liberalisation for Turkish citizens is likely to be a key demand, despite continuing resistance to the idea from a number of member states.

With more than 30,000 migrants trapped in Greece as countries close their borders, EU leaders will seek to strike a deal with the Turkish Prime Minister on reducing the number of migrants entering the European Union through Turkey.

At least 25 migrants died yesterday in the latest sinking in the Aegean Sea, after a boat carrying migrants from Turkey to Greece capsized near the Turkish resort of Didim.

Speaking on his way into the summit, the Turkish prime minister who held almost five hours of talks with German Chancellor Angela Merkel and Dutch Prime minister Mark Rutte on Sunday in Brussels, said that Turkey was ready to work with the EU

1 Fatal police shooting in Kentucky cuts to heart of community divisions
2 ‘Summer is not lost’ - Taoiseach announces accelerated easing of coronavirus restrictions
3 Coronavirus: People to be allowed to travel anywhere in their county from Monday
4 California police fatally shoot 22-year-old man on knees with hands up
5 Donald Trump is in trouble, and that could spell very bad news
Real news has value SUBSCRIBE