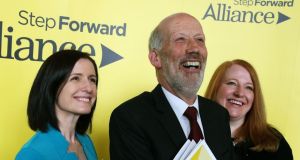 Speaking in Belfast as the party published its general election manifesto, Mr Ford said the campaign would be “extremely important” for the North but should not be an election “simply about whether a small group of MPs from Northern Ireland hold a government to hostage for money”.

“This has to be an issue about ensuring we start to change the culture of Northern Ireland,” he said. “We have a government in Westminster which plays its part in helping us to build our economy and at the same time transform our society.

“[The challenge for Northern Ireland is] to transform this society using the opportunities we have by working with the Westminster parliament and the new government of the United Kingdom. Not to simply play short-term political games.”

In the party’s manifesto, Mr Ford calls for a Northern Ireland where “we don’t insist on one-sided policies on flags or decisions on parades”. The first priority for new councils should be making “local communities better places to live” rather than what flag to fly or language to use on the letterhead.

The party’s deputy leader and only outgoing MP Naomi Long said Alliance was “not going to Westminster to hold a gun to people’s heads and to threaten chaos if we don’t get our way”.

“Neither are we going with a begging bowl constantly asking for more,” she said. “We are going to Westminster with a plan for reform, to change Northern Ireland, to make Northern Ireland a more prosperous, a more stable, and a more important part of Europe and the rest and the world.”

On public finances, the manifesto “accepts the principle that the deficit should be reduced and that government should not regularly spend more than it raises in taxes”. It says tax increases and spending cuts, at a ratio of 1:2, should be part of a plan to reduce the deficit.

The North is currently in political deadlock over welfare reform and Alliance says it has “always accepted that Northern Ireland is not in a financial position to refuse to implement these changes once agreed by Westminster”.

“Benefit claimant rates here are too high, and employment levels too low, for a separate Northern Ireland benefits system to be affordable,” it says. “We have always been realistic about making affordable changes to the benefits system to ensure that it is fairer than the system used for the rest of the UK.”

In terms of political reform, the party pledges to “open up” political donations to public scrutiny, and supports lowering the voting age to 16. There is also criticism of the “almost complete failure of leadership” over crucial issues and the “breakdown of functioning relationships” between the two leading parties within the Executive.

The party also outlines a vision for a “shared future” for communities, which includes achieving a figure of 20 per cent of children in integrated schools by 2020.

Alliance is calling for an end to tolerance of illegally erected flags and emblems, and said it will work with communities to secure the removal of peace walls. It says the peace process “remains under threat” because of the failure of politicians to come to an agreement on these issues.