Election 2020: Warm welcome for Sinn Féin in Tralee despite end of Ferris dynasty 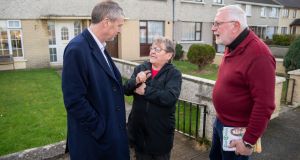 There was a warm reception for Sinn Féin canvassers in the homes of Balloonagh /Ballyrickard, Tralee this week as they knocked on the last of hundreds of doors .

Former tánaiste Dick Spring is in New Zealand visiting his grandchildren. Labour for the first time in a general election since 1933 have no candidate in Tralee. The Spring dynasty has gone.

The expected Sinn Féin Ferris dynasty has not risen either, with the departure from politics of Toireasa Ferris. Despite this, with the wind behind Sinn Féin, candidate Pa Daly is no longer the expected meat in the sandwich for a second Fianna Fail seat.

Outgoing TD Martin Ferris is fitter than ever,. “It’s from all the walking,” Martin says striding to door in St Anne’s Terrace.

Ferris, the old style Shinner, has held the seat for Sinn Féin since unseating Dick Spring in 2002 – a controversial arrest by gardaí garnered huge support for Ferris at the time and helped him top the poll.

He is able to talk about leaking pipes in a young woman’s house , before taking a call on his mobile to tell Daly the Northern Ireland minister Caitriona Ruane will be canvassing with him.

Ferris has done his time as a TD and had done his time in other senses too having served a sentence for gun-running. But there seems to be an easy transference to the new generation, Pa Daly, a busy solicitor, called “Deputy Daly” by Ferris.

Soccer coach Daly ribs Ferris about “the foreign game” as he tells an U-12 Tralee Dynamos young man they will be facing Camp on Saturday, “an away game”.

Back in the day, soccer and rugby would have been anathema to Kerry Republicans and only the GAA was kosher. Martin Ferris himself was a talented GAA footballer.

The pension at 65, and insurance and confusion about Sinn Féin’s stand on greyhound racing – north Kerry is greyhound country — are the big issues in Tralee , both Daly and Ferris say.

The North and the Troubles and the past are not featuring. At all. It is regarded as history, Daly whispers.

Daly, a hard working councillor since 2012 , is at home in a discussion about Tralee town centre. The former bacon factory was once one of the main employers in Tralee. Wound down by Kerry Group, the site was donated to the town but plans to move the courthouse up there are not popular.

Shops have closed in Tralee town centre and “the town centre is empty”, ex-bacon factory worker Pa Sullivan, whose brothers too worked in the factory, tells Pa Daly.

“I don’t want the courthouse up there. None of the lads working up there do,” Sullivan says,

Daly wants the public sector to move into town. Tralee is stuffed with HSE/ local authority and education jobs, but all are on the outskirts .

“You need footfall. You need to bring some of the HSE and council offices into the town,” Daly says, referring to a woman who said she saved €100 since moving to work in offices out of town because she is not having lunch out and running to the shops.

But it is not all Sinn Féin in Ballinorig. Michael Healy-Rae has a large poster up near his supporter’s home Cllr Sam Locke (Ind).

You would be mistaken to think the Healy-Raes and Sinn Féin are at loggerheads though. One of Daly’s key men, on the canvass, is Junior Locke a first cousin of Cllr Sam Locke’s. The pair have an easy banter but then — Michael Healy Rae and Ferris have always been transfer friendly.

The TG4 poll putting them at 20 per cent neck in neck with Michael Healy-Rae has emerged is not something Daly and Ferris are bowled over by, or even pleased about, dreading the safe seat tag . Last time out that poll was way out and had Ferris losing a seat he comfortably regained.

Martin Ferris readily concedes Daly will have a broader appeal than himself but says he is also maintaining the old vote.

Has the hand over by the old style Sinn Féin helped the rise and rise of Sinn Féin in the polls?

“We have a pile of work done. Pa, Cathal, Toireasa,” Martin Ferris says, referring to Sinn Féin councillors in Tralee through the years.

It could be the case that the withdrawal of the old regime has helped “but it is hard to know”, he says.

Rescue operation under way to prevent freighter hitting rocks 19:22
Brian Hayes says he considered resigning over Oireachtas golf dinner 19:21
School ordered to reopen after closing due to Covid-19 fears 19:30
Warning over impact of timber shortages due to forest licence backlog 19:14
One hundred Irish retailers for all your online Christmas shopping 19:08