US vice-president quipped: ‘Anyone wearing orange is not welcome in here’ 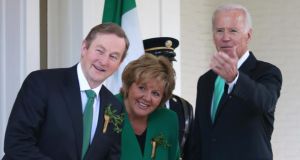 Mr Biden said: “Anyone wearing orange is not welcome in here” when welcoming Taoiseach Enda Kenny to his Washington residence, adding that he was “only joking”.

His comment angered members of the Democratic Unionist Party (DUP), whose justice spokesman the Rev William McCrea has penned a letter to president Barack Obama’s deputy.

“Whether they were intended as a joke or not, the comments are a slur on those who would be known as ‘orange’ ie Protestants,” Mr McCrea said.

“This term is much wider than anyone who is a member of the Orange Order. It has traditionally been used to define people from the Protestant faith.”

The South Antrim MP said Mr Biden should apologise for his remarks and “take corrective action” to prove people from a Protestant background were welcome at his home.

“Undoubtedly if he had made such a remark about any other faith group there would be calls for his resignation.”

Mr Biden is renowned for his controversial comments. However, his remark on St Patrick’s Day came at a particularly sensitive time for Northern Ireland, with the impasse over welfare reform continuing.

In contrast, Mr Biden’s comments were “disgraceful and careless”, he added.