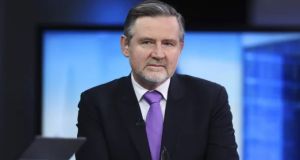 A senior member of the British Labour Party’s shadow cabinet has accused the Government of playing up the issue of the Border in Brexit negotiations for economic reasons and described the Good Friday Agreement as a “shibboleth”.

Barry Gardiner, Britain’s shadow international trade secretary, told a conference in Brussels last month that fears that hardening the Border could bring a return to violence were confusing cause and effect.

In a recording of his remarks, which The Irish Times has heard, he said the watchtowers and other physical infrastructure that had been built on the Border during the Troubles were removed 20 years ago to deprive terrorists of a target after the Belfast Agreement.

“But that doesn’t mean that putting in a normal border relationship when one party is no longer in the EU will bring back paramilitary activity - that is to confuse cause and effect.

“And I think we must also recognise that there are real economic reasons why people have played up the issue of the Irish border and the need to have the shibboleth of the Good Friday agreement. And that is because it is hugely in the Republic of Ireland’s economic interest to make sure that there is no tariff and no external border there,” he said.

Mr Gardiner was addressing a conference organised by the European trade union movement and the Rosa Luxemburg Stiftung, a political foundation attached to the German Left party, on March 20th.

Mr Gardiner went on to ascribe political motives to Sinn Féin’s focus on the Border after Brexit.

“And of course there are very good political reasons. Sinn Féin, who are members of this group and trusted colleagues, of course want to see the unification of Ireland and that is a political objective of Sinn Féin.

“But it doesn’t mean that a normal border will bring back paramilitary activity. And so, these are deeply unfashionable remarks to make, but actually I do think that we do need to understand that there are economic reasons, there are political reasons, and they do not always concur with what we are putting forward - from all sides - as this shibboleth of the Good Friday Agreement. I think we need to actually start drilling down.”

Mr Gardiner was not immediately available for comment but Owen Smith, who was sacked as Labour’s shadow Northern Ireland secretary last month for advocating a second Brexit referendum, condemned the comments.

“Labour members will be particularly shocked, but it should concern people in every party and none that there now seems to be a substantial group of senior politicians - from Daniel Hannan to Barry Gardiner - who are prepared to sacrifice the Good Friday Agreement in order to deliver Brexit.

“Instead of supporting those in Northern Ireland committed to making the Agreement work, these ideological Brexiters put leaving the EU ahead of everything else.

“They must be resisted by all those, who value the achievements of the Agreement, and above all the peace it has brought. If the choice is between Brexit and the Good Friday Agreement, we must support the Agreement every time,” Mr Smith said.

The night shift: ‘In 38 years, I’d never seen an owl in the city centre’