Labour TD John Lyons is eliminated on the eighth count 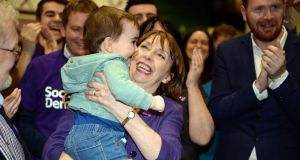 Róisín Shortall of the Social Democrats celebrates with her grand-nephew Dara Baxter (2) after being elected in the Dublin North-West constituency. Photograph: Eric Luke/The Irish Times. 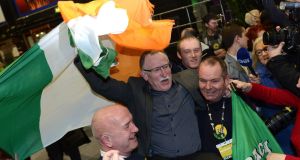 Fine Gael’s Noel Rock has been elected in Dublin North-West after the ninth count.

Labour TD John Lyons lost his Dáil seat after he was eliminated on the eighth count, 1,150 votes behind Mr Rock.

The transfers from Mr Lyons’s votes decided whether the seat went to Fine Gael or to Paul McAuliffe of Fianna Fáil.

Social Democrats co-founder Róisín Shortall took the first after exceeding the quota on the first count with 10,540 votes.

Dublin North-West is a three-seater that is predominantly blue collar and was for much of the 1990s and 2000s a Fianna Fáil stronghold.