Dublin city profile: More seats up for grabs on council 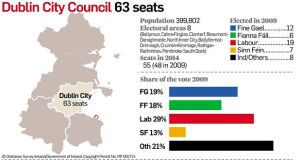 The State’s largest local authority is about to get even bigger as the number of seats on Dublin City Council goes from 52 to 63 as a result of the boundary commission’s recommendations.

With 151 candidates in the race, the increase in seats should provide comfort to existing councillors, who can expect name recognition to carry them some of the way back to the chamber. That said, 15 of the incumbents were co-opted to replace councillors who resigned and are putting their names before the electorate for the first time.

Then there’s the new-look Chris Andrews, a former Fianna Fáil councillor and TD who is hoping to return to the city council, this time for Sinn Féin.

Defections from Sinn Féin were a more common feature of the outgoing council; the most dramatic was that of Christy Burke. The party’s longest serving councillor, first elected in 1985, declared himself an Independent just three days after the last local elections. Louise Minihan lasted just a month longer before leaving for Éirígí.

Further hurt was yet to come with Killian Forde, once seen as a rising star of the party, deserting to take up with Labour, swelling that party’s ranks to 20 and leaving Sinn Féin with a miserable four seats. However, Forde left the council the following year and Sinn Féin was able to recoup the loss by co-opting Mícheál Mac Donncha.

Despite the extra seats up for grabs, it is highly unlikely Labour will repeat the outstanding success of 2009, when its numbers rose to 19, making it the largest party on the council by seven seats. It is now down to 18, Paddy Bourke having recently become an Independent.

Decimation is also unlikely. Those who were elected last time have a reasonable chance of retaining seats . However, eight of the co-opted councillors are Labour members, and have yet to prove themselves at election. The Rathgar-Rathmines ward could be the toughest for the party, with Oisín Quinn, Mary Freehill and Henry Upton all standing for just six seats.

Of Fine Gael’s 12 sitting councillors, just two are women, Clare Byrne and Edie Wynn, and neither are standing again. All the other incumbents are running again, except Ruairí McGinley.

Despite being seen as a hard-working councillor, he has not been selected for Fine Gael and is running as an Independent.

McGinley may have been sacrificed in favour of getting more women on the ticket, with six new female faces among the party’s 22 candidates. The party could hold its 12 seats, but is unlikely to do much better.

Fianna Fáil, on the other hand, will be hoping to do a lot better than the disastrous 2009 performance, when its numbers halved from 12 to six, from a party that had held 22 seats 10 years ago. All incumbents are running again, except the best vote-catcher, Mary Fitzpatrick. The only Fianna Fáil city councillor to top the poll in 2009, Fitzpatrick is contesting the European elections. The party is running three council candidates in her Cabra-Finglas seven-seater ward – David Costello, Paul Anthony Ward, and Darren Lehane, and it is likely one will get elected.

Fianna Fáil is taking a gamble in Clontarf where there are just six seats and it is running both sitting councillors, Deirdre Heney and Haughey.

Independents and others already have a strong force of 11 on the council and their numbers are almost certain to increase. There are almost 40 Independents running in the city, and a further nine People Before Profit candidates.

The north inner city is the most crowded with Independent candidates, with nine seeking the eight seats on offer. Sitting councillors Christy Burke and Nial Ring are most likely to retain seats here.

From the poorest to the most affluent areas of the city, housing and property issues are emerging as the biggest concerns on the doorsteps. At one end of the scale there is desperation about the chronic lack of social housing, while homeowners worry about an inability to pay property tax and an anger that despite paying a higher rate than anywhere else in the country, so little of the local property tax is retained in the city.

Candidates also report annoyance over the accumulation of charges and taxes and, particularly in the southeast of the city, a lack of school places.