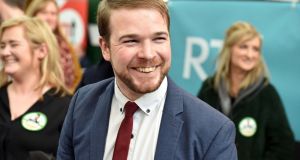 The youngest TD in the constituency, Donnchadh Ó Laoghaire (30) was seen to be vulnerable but the party’s momentum put paid to that notion.

The party’s education spokesman, he also speaks on justice issues and in December introduced legislation to amend the 1981 Criminal Justice Rape Act to allow victims be legally represented court.

An engaging and fluent Irish speaker, he is from Togher, and has repeatedly highlighted issues around poverty, disadvantage and inequality, especially access to education and the financial burden for parents, including back-to-school costs.

A UCC law graduate, he joined Sinn Féin in college aged 18 and took a year out to work as the national organiser of the party’s youth wing, Ógra Shinn Féin.

He worked as a parliamentary assistant to then Sinn Féin senators David Cullinane and Trevor Ó Clochartaigh and former Cork East Sinn Féin TD, Sandra McLellan, from 2011 until he was elected on the first count to Cork County Council in 2014.

He represented the Carrigaline-Ballincollig Municipal District on the council until his election to the Dáil in 2016.