Does appointment of McNulty to board of Imma meet seven principles of public office?

Opinion: ‘The big issue is that there are standards that should apply to every office-holder’ 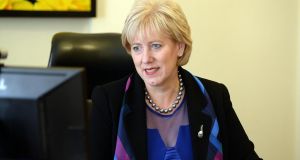 ‘The Taoiseach told the public one day that the decision to appoint McNulty was made by Heather Humphreys (above); the next day that he alone was responsible.’ Photograph: Cyril Byrne / THE IRISH TIMES

Let’s be clear about what we’re dealing with in the charade of John McNulty’s appointment to the board of the Irish Museum of Modern Art (Imma): the abuse of public office. It is not really about qualifications for boards or gender balance in the Seanad, though those things matter too. The big issue is that there are standards that should apply to every officeholder and that they have been roundly abused.

Why do I say public office was abused? The committee on standards in public life in the UK, established in the wake of the infamous outbreak of sleaze under John Major’s government in the 1990s, usefully set out seven key principles that must be followed by holders of public office. I think most people would accept them as clear and universal standards for any democracy. Six of these seven principles were seriously compromised by Taoiseach Enda Kenny and Minister for the Arts Heather Humphreys, in the McNulty case.

The first principle is the one that was not breached: integrity. This is defined as placing oneself “under any financial or other obligation to outside individuals or organisations” that might compromise an officeholder. In this sense there is no question about the personal integrity of Kenny or Humphreys. This is the end of the good news.

The interests of Fine Gael

The third principle is “objectivity”: “In carrying out public business, including awarding contracts and recommending individuals for rewards and benefits, you should make choices on merit.” In order for McNulty to have been recommended on merit for the benefit of Imma board membership his candidacy would have to have been compared with that of other potential appointees. What skills are lacking on the current board? Who among those who have expressed an interest in serving is best placed to fill those gaps? No such process took place, so it cannot be said that he was appointed on merit. Strike two.

Next we have “accountability”: “You are accountable for your decisions and actions to the public and must submit yourself to whatever scrutiny is appropriate for your office.” The appropriate scrutiny here is the answering of questions in the Oireachtas. In this case, Humphreys both made misleading statements to the Seanad (she implied McNulty could “effectively serve”on the Imma board and spoke of his “tenure” – the first being impossible and the second effectively nonexistent) and declined to answer straight and simple questions. Strike three.

The fifth principle is “openness”: “You should be as open as possible about the decisions and actions that you take. You should give reasons for your decisions and restrict information only when the wider public interest clearly demands.” The Taoiseach told the public one day that the decision to appoint McNulty was made by Humphreys; the next day that he alone was responsible. One of these was untrue. Strike four.

Sixth is “honesty”: “You have a duty to declare any private interests relating to your public duties and to take steps to resolve any conflicts arising in a way that protects the public interest.” Neither the Taoiseach nor the Minister declared the private interest that lay behind the appointment, Fine Gael’s need to block any questions about McNulty’s Seanad candidacy. Strike five.

Finally, there’s “leadership”: “You should promote and support these principles by leadership and example.” These standards should apply to the most junior public servant. If he or she looks to the Taoiseach or the Minister, for example, woe betide us. Strike six.

So we have a pass on integrity and clear failures on selflessness, objectivity, accountability, openness, honesty and leadership. Six out of seven ain’t good. This is the pocket rocket of scandals: the action itself is relatively small but it packs a hell of a lot of punches into the face of ethical governance. I’m not suggesting that this affair is as serious as the large-scale cases of corruption in high office we’ve seen before. But it is remarkable for the sheer thoroughness of the abuse. Indeed, precisely because the stakes were so small it is all the more breathtaking that so many fundamental principles would be shredded.

For the sake of that pearl beyond price, a shoo-in seat in the ludicrous, unreformed Seanad, the Taoiseach was prepared to blow away almost all the very painful progress in detoxifying Irish public life. He was willing to send out the message to every public servant that all our principles of selflessness, openness and accountability are very, very important – until some daft little expediency comes along and suggests otherwise. Big, epic acts of corruption at least do ethical principles the honour of grand defiance. Petty, stupid abuses of public office just shrivel those principles with thoughtless contempt.