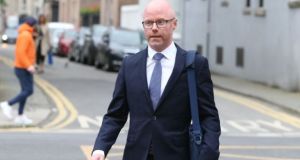 Minister for Health Stephen Donnelly will direct the Government decision on whether to go ahead with the CervicalCheck tribunal, which campaigners have criticised as not fit for purpose in its current planned format.

“It is his judgment then, whether the Government on Tuesday will make a decision to defer the establishment of the tribunal,” Mr Varadkar said. “Obviously I will be guided by him in that regard.”

The tribunal aims to provide an alternative to the courts for dealing with claims from the CervicalCheck screening controversy.

Ms O’Reilly had appealed for the Government to alter its current plan for the tribunal to deal with claims and to take a less adversarial approach and oppose the inclusion of laboratories in the process.

But Mr Varadkar said some cases were not clear cut and they could not deny a doctor or scientist the right to a defence.

Ms O’Reilly said the Minister “is insisting that the laboratories must be involved in the proceedings taken by the tribunal” but this was “entirely wrong. The Government should not be joining these labs in fighting these women and their families.”

At the very least she said the setting up of the tribunal on Tuesday should be delayed to allow for further discussion.

Ms O’Reilly also said “the Minister has written to the women to say the tribunal will be established next week and they got that news at the same time as the public announcement”.

The Dublin Fingal TD said the women have to be listened to.

“They have been let down time and again.”

Mr Varadkar said the tribunal is being established in good faith by Government to honour the commitment it made as an alternative to court or where cases cannot be settled by mediation. But he said in some cases the evidence may not be clear cut.

“The person taking the case may feel their smear was misread negligently the scientist that read it or doctor who signed off on it and there may be a dispute about the fact.”

He said: “It is hard to come up with a solution to get around that so I don’t think it would be fair to deny a scientist or a doctor the right to be heard, the right to say ‘I wasn’t negligent I actually read the smear correctly’.”

Earlier CervicalCheck campaigner Vicky Phelan said the tribunal is “not fit for purpose” and that she feels forced to advise affected patients not to engage with the process.

Ms Phelan said on RTÉ radio that there was “a lot wrong” with the Government’s plans for the tribunal and that a “non-adversarial route” was needed which would not oblige women to fight back against the labs.