Do Fianna Fáil aspire to government or opposition this time around? 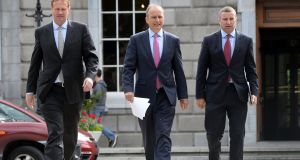 Fianna Fáil will enter this election debating whether it wants to be the strongest opposition party in Leinster House or the smaller party in Government.

Voters have yet to forgive the party for the mistakes of the past but disillusionment with the current Government and wariness of Sinn Féin may swing things in favour of Fianna Fáil.

The party has struggled to make any major gains in the opinion polls.

While its nearest rivals Sinn Féin and Fine Gael have fluctuated over the past four years, Fianna Fáil has remained stagnant.

Party leader Micheál Martin has been effective in highlighting issues like Garda malpractice and the Irish Banking Resolution Corporation write-offs.

However, the party took their lead from opposition colleagues Mick Wallace, Clare Daly and Catherine Murphy on those issues.

Every time Martin raised the concerns he (rightly) referenced the deputies who had brought them to the floor of the Dáil.

On two of the biggest issues of recent years - Irish Water and the same-sex marriage referendum - Fianna Fáil struggled.

It was Brian Cowen’s government that agreed water charges with the troika in 2010. As other opposition parties supported the water charge boycott (and saw their support rocket), Fianna Fáil reserved its fire for the Irish Water utility and calling for its abolition (and saw its support stay still).

The same-sex marriage referendum proved difficult for the party. Martin confirmed Fianna Fáil would support allowing gay couples to marry. However, few TDs supported the call and even fewer campaigned in favour. The most vigorous campaigners on the issue were Mr Martin, Robert Troy, Billy Kelleher, Timmy Dooley and Dara Calleary but leadership was minimal in what turned out to be a historic campaign.

It was Senator Averil Power who was Fianna Fáil’s saving grace in the campaign. Days after the vote was declared, she left the party and outlined her frustration at the lack of leadership on the issue. Ms Power’s departure created additional woes for Fianna Fáil.

Only one female remained in the parliamentary party - Senator Mary White.

Gender quotas proved to be extremely difficult for the party. Directives were issued in Dublin Central and Dublin South Central to select only female candidates. In Longford the party faithful were so outraged at the order issued in their constituency they vowed not to canvass or support the female candidate chosen.

Dublin Central candidate Brian Mohan has taken a legal challenge against the legislation.

Often the biggest battle Fianna Fáil faces is with itself. The performance of the party has often been overshadowed by internal disputes, a lack of cohesion on important issues and unhappiness at the party leader.

Electorally its biggest challenge is in Dublin and whether the party can elect a single TD in the capital city.

Party insiders believe they can elect up to five TDs in Dublin in this election. Securing that would be the first signal the party is on the way back.

The party is struggling in some parts of the country mostly due to a lack of strong candidates.

However, it will perform better than most people believe.

Fianna Fáil’s support in the polls would suggest it will elect over 30 TDs. Anything less than that would be a disaster for the party.

A very good day could see the party elect 40 deputies and return two in some constituencies - most notably in Cork South Central where Micheál Martin and finance spokesman Michael McGrath are contesting.

Fianna Fáil is no longer the toxic brand it was in the 2011 election. The local elections proved that.

The party is not forgiven but it has not been forgotten either.