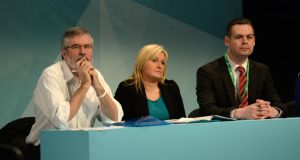 A guest speaker advocating a Yes vote in the upcoming marriage equality referendum at the Sinn Féin ardfheis has asked delegates for “permission to let me marry the woman that I love”.

Ms Murray said she lived with her partner and their child, and the referendum was close to her heart.

“We are a family just like any other but unfortunately our family does not have the same status and standing in society, nor does our family have the same legal rights and protection that is available to other families.”

Ms Murray told delegates they could play a part in making history. A Yes vote would send a clear message to the world that Ireland was a country that embraced equality and diversity, she said.

“Two years ago my brother respectfully asked his father-in-law permission to have his daughter’s hand in marriage. So now I stand before you and I ask you for permission to let me marry the woman that I love.”

Sinn Féin is supporting a Yes vote in the referendum on May 22nd.