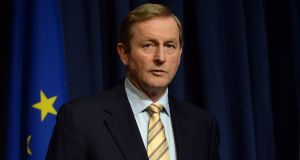 Taoiseach Enda Kenny: “There will be no immediate change to the free flow of people, goods and services between our islands.” Photograph: Brenda Fitzsimons/The Irish Times

Taoiseach Enda Kenny and British prime minister David Cameron have agreed that officials will immediately discuss issues such as the common travel area and the Border with Northern Ireland following the Brexit referendum result.

In a telephone conversation on Friday, Mr Kenny told Mr Cameron he understood the rationale for the prime minister’s preference for starting negotiations with the European Union on leaving the union after a new Conservative Party leader has been selected.

According to a note of the phone call, “it was agreed that it would be [a] priority that there would be no interruption to the close bilateral work at political and official level on Northern Ireland.

“Moreover, it was agreed that there would be immediate bilateral contact between senior officials on the issues of mutual interest arising from the referendum, including the common travel area and the Border.”

The Dáil is to be recalled on Monday to discuss the fallout from the Brexit referendum.

At press conference in Dublin

on Friday, Mr Kenny said the Government had prepared to “the greatest extent possible” for Brexit. He also stressed that “Ireland will, of course, remain a member of the European Union” which he said was profoundly in our national interest.

“There will be no immediate change to the free flow of people, goods and services between our islands.”

He said the decision on when Britain should formally begin the process of negotiating an exit from the EU by invoking article 50 of the Lisbon treaty was a matter for the UK government.

The European Commission, however, said the process must begin as soon as possible. The issue is expected to feature at an EU summit meeting next week which will discuss the Brexit fallout.

Mr Kenny said he supported Mr Cameron’s position and believed the negotiations must be given “breathing space”.

Fianna Fáil leader Micheál Martin said he and his party would work with the Government as it tried to defend Ireland’s interests in the negotiations on the UK leaving the EU. He said he and Mr Kenny would “tic-tac” ahead of the summit. He will also be in Brussels for a summit of party leaders from the Alde group to which Fianna Fáil belongs.

“It is extremely important that we work in the context of those negotiations to preserve the unique relationship between Ireland and Britain: economic, social and cultural. Just as we took a very constructive approach in terms of the fiscal treaty referendum while in Opposition, on this occasion also we will be doing everything we possibly can to support the national interests and support the best interests of the Irish people,” he said.