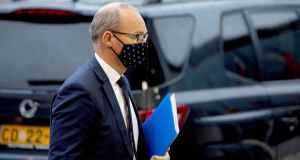 Minister for Foreign Affairs Simon Coveney held a bilateral meeting with his Austrian counterpart, who has since tested positive for Covid-19, on Monday of this week.

Both Mr Coveney and Alexander Schallenberg attended the EU Foreign Affairs Council on Monday. On Saturday, Mr Coveney confirmed that he held a bilateral meeting with Mr Schallenberg following the council. The bilateral took place in the Irish delegation rooms in Luxembourg.

The meeting was convened to discuss Brexit and also the European Peace Facility, which is of common interest to both Ireland and Austria as they are both neutral countries. Around five people attended the meeting which involved social distancing of at least two metres, and which lasted around 15 minutes.

The Health Service Executive (HSE) website states that a close contact can mean “spending more than 15 minutes of face-to-face contact within 2 metres of someone who has Covid-19, indoor or outdoor”.

The Minister also attended a meeting of the General Affairs Council on Tuesday, as did Thomas Byrne, the Minister of State in the Department of Foreign Affairs. That event was attended by Belgium’s foreign minister, Sophie Wilmes, who has also tested positive for the virus.

Mr Byrne returned to Ireland with Mr Coveney on Tuesday evening, and then travelled to Brussels with the Taoiseach on Thursday. Both Mr Coveney and Mr Byrne tested negative on their return, and have been limiting their movements to essential work only.

This involves travelling to the Dáil, Cabinet meetings, work in the Department and their own offices. Mr Byrne spoke in the Dáil on Wednesday, and Mr Coveney attended a socially distanced Cabinet meeting on Wednesday to discuss enhanced measures to control the virus in Ireland.

Under Irish protocols, Mr Coveney will be tested again seven days after his first test.