Minister unveils plans to free up over 2,000 hectares of State-owned land for housing 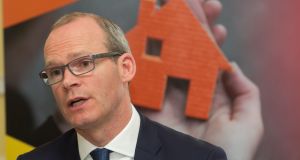 Minister for Housing Simon Coveney, who is facing calls to double property tax bills on houses left vacant for more than two years, has confirmed that he is considering the introduction of a levy.

Despite the housing shortage it is currently estimated that 168,000 houses, excluding holiday homes, are idle – including 33,000 of them in Dublin alone.

A plan to cut that number will be published within six weeks, the Minister declared, as he unveiled plans to free up over 2,000 hectares of State-owned land for housing.

The State lands include 1,700 hectares owned by local authorities and the Housing Agency, along with 200 hectares more highly-prized centrally-located lands in 30 sites owned by State or semi-State bodies.

In all the lands could house up to 50,000 new homes, said the Minister, adding that the Dublin local authorities were ready to go ahead with plans to develop 3,000 social and affordable homes

The number of vacant properties has fallen by 43,000 since 2011. “That doesn’t mean that there aren’t still an awful lot there and we have a lot to do,” he said.

Currently between 8.5 per cent and 9 per cent of Ireland’s housing stock is vacant, compared with 2½ per cent to 3 per cent approximately in the UK. “So we need to half that number.”

Mr Coveney is understood to be examining proposals by Fine Gael TD Fergus O’Dowd to double the property tax on properties left unused for two years.

However, he is understood to be doubtful about calls to target houses in the most sought after “rent pressure zones”, believing that such moves would face constitutional difficulties.

“We need a strategy that can get us there over time, and the Housing Agency are working on a vacant housing strategy which we will launch in a few weeks time, and that will add more thinking to what is already there.”

Such a measure has been long called for by the Peter McVerry Trust, who believes €54 million can be generated from a levy.

The Government had resisted such a measure previously, but Mr Coveney confirmed it was now under active consideration by his department.

The Minister denied this was mass privatisation, insisting there was ample opportunity for local authorities to retain ownership. The onus was on the councils to use the land to its maximum potential.

“This is not a sell-off of land. Much of this land will stay in State ownership and we will work with private owners to create mixed tenure, diverse communities.”

Sinn Féin and People before Profit have criticised the measures by the Minister, insisting developments by private operators will result in less social housing.

Richard Boyd Barrett TD said the focus should be on building homes for those on the social housing lists rather than off-loading State land.

Meanwhile, Mr Coveney also confirmed he has held a number of discussions with Dublin City Council about the potential for more high rise buildings in the city. Currently apartment heights in low-rise areas of the inner city in Dublin are limited to 24m, something many developers have questioned.

Mr Coveney said he was “a big believer in high rise in the right places”, insisting such developments could result in high quality urban communities.

“I would encourage the representatives on Dublin City Council to look with an open mind at any restrictions being put in place, and we have already had a conversation around that and there has been some improvement in the situation.

“Clearly we don’t want to be building skyscrapers in Georgian Dublin but there are lots of other sites that actually have the capacity to build high buildings.”