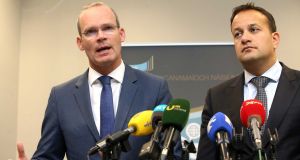 Those working for Leo Varadkar and Simon Coveney – and possibly others – will be working the numbers in the weeks ahead, trying their best to plot a route to the office of Fine Gael leader and Taoiseach.

The numbers in this leadership contest will be a novelty for Fine Gael, with the final result to be decided by an electoral college that gives 65 per cent of voting weight to the parliamentary party, 25 per cent to rank-and-file members and 10 per cent to councillors.

It will be the first time the leader of the party will be elected in such a fashion. Previously, it was a matter only for the parliamentary party.

Yet TDs, Senators and MEPs still hold the whiphand this time. There are 73 members of the Fine Gael parliamentary party: 50 TDs, 19 Senators and four MEPs. Each member of the parliamentary party therefore counts for roughly 0.9 per cent of the entire electorate, and so each candidate will have to try to nail down as many of them as possible.

One person in the Coveney camp said it would not be enough to have a coffee or drink around the environs of Leinster House with someone who needed to be persuaded. This election, the source said, will be more akin to a Seanad campaign, with the members of the electorate expecting personal visits to their homes to let them know just how much they are wanted.

Lists of TDs, Senators and MEPs have been in circulation in Leinster House since last week, with an “S” or “L” beside each name, indicating Coveney and Varadkar.

It will be here that the numbers will tell lies. No matter how firm both camps believe an individual’s vote to be, they will never be certain until the final results are announced.

The Varadkar camp put the split among the 73 members of the parliamentary party at 35:25 to their man, with question marks over the remaining 13. In the Coveney camp, it was 37 to 32 to the Minister for Housing, with four too hard to call.

Let’s, for argument’s sake, take five votes from each side’s assessment of support for their candidate, to account for possible over-optimism. That puts the Varadkar figure at 30:25 in his favour and Coveney’s figure at 32:32. In a contest that has yet to officially begin – although it has effectively been under way for some time – these are very tight positions.

It is certainly much tighter than early payouts by bookmakers on Varadkar would indicate. Some TDs are more equal than others, however.

“It’s like the US elections,” said one source. “There are swing states, big names who’d have influence and bring others and large chunks of the membership with them.”

In this group are Simon Harris, Michael Noonan, Paschal Donohoe, Frances Fitzgerald and Charlie Flanagan. All bar Donohoe and Flanagan are viewed as likely to support Coveney, with the intentions of Donohoe and Flanagan harder to decipher. Another seen as influential is Michael Creed, the Minister for Agriculture and a Cork North West TD.

It is also believed that Noonan would like to remain in Cabinet, but Coveney has told supporters he will not engage in the dealmaking and promises that are usually the staple of leadership contests. Some of his backers despair that he is being too virtuous.

Varadkar’s strength lies on the backbenches and among TDs from Dublin and the east coast, although Galway West’s Seán Kyne is a prominent backer. He has also pulled off the unusual feat of having both TDs from the same constituency on his side, such as Carlow Kilkenny’s John Paul Phelan and Pat Deering.

Phelan will hope to bring the substantial party membership in his home county of Kilkenny with him to Varadkar’s cause.

It is believed Fine Gael has about 24,000 party members, with 2,000 in Dublin. The remainder are based in clusters around the country, such as Mayo, Sligo, Cavan, and Longford-Westmeath. TDs in those constituencies would be expected to influence their own members such as if, for example, Minister for Arts Heather Humphreys declared for Varadkar. Longford-Westmeath’s Peter Burke is understood to favour Varadkar.

Regional hustings will be key in swaying the rank and file too, whose 25 per cent voting strength is viewed as a crucial battleground.

The support of Fine Gael’s 230 councillors, who account for 10 per cent of votes, will be hard-fought also.

It is just as well, then, that this contest will effectively take two months from now. Plenty of people to see; plenty of votes to be won.