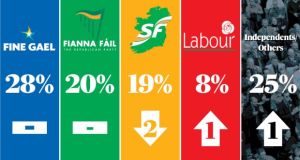 The prospect of a November election has receded with the latest Irish Times/Ipsos MRBI poll showing the Coalition parties are short of the support required to be confident of retaining power.

The poll shows that support for Fine Gael has remained steady since May while there has been a marginal increase for the Labour Party.

Both parties need to gain significant extra support to have a realistic chance of retaining office for a second term.

Support for Fianna Fáil has remained steady since the last poll in May and the party is now ahead of Sinn Féin which has lost support for the second Irish Times poll in a row.

A quarter of voters back Independents and smaller parties. A breakdown of that support shows that the Independent Alliance led by Shane Ross is on 3 per cent as is the left-wing People Before Profit/Anti Austerity Alliance.

The survey was undertaken on Monday and Tuesday of this week among a representative sample of 1,200 voters aged 18 and over, in face-to-face interviews at 100 sampling points in all constituencies.

Voters who said they intended to vote for Independents/Others were then given a range of options to choose from.

The Independent Alliance and People Before Profit/Anti Austerity Alliance get 3 per cent each. Renua is on 2 per cent, the Social Democrats on 1 per cent and other groupings are on 1 per cent.

Independents who are not in any group attract the support of 5 per while the Green Party is on 1 per cent.

Independents/Others are particularly strong in Dublin where they account for 32 per cent of voters, a considerably higher share of the vote than that obtained by any of the major parties.

The increase in Labour support to 8 per cent represents a move in the right direction for the party after a series of poor polls but it will need to make further gains to have a fighting chance of holding a significant number of Dáil seats.

Satisfaction with the Government has held at 30 per cent and Taoiseach Enda Kenny’s rating has remained steady at 31 per cent, giving him the highest rating of any party leader.

It would indicate that the Fennelly report and the Dáil motion of confidence in the Taoiseach has not done Mr Kenny the kind of damage that the Opposition parties were hoping for.

Nonetheless, the poll contains good news for Fianna Fáil as the party vote has held steady and it is now ahead of Sinn Féin as the election looms ever closer.

The controversy that developed after the murder of Kevin McGuigan in Belfast, following the sex abuse scandals in the republican movement over the past year, may have contributed to the decline.

More encouraging news for Sinn Féin is that the party continues to do well in Dublin where it has passed out Fine Gael as the largest party.

Coronavirus: HSE apologises to thousands asked to do their own contact tracing 11:43
John Gilligan arrested along with two others in southern Spain 10:32
China’s scaled-up climate targets send ‘a pointed message to US’ 08:00
Thousands of gardaí mount checkpoints and patrol parks, beauty spots 07:35
£700m ‘wasted by delays and overruns’ in 11 key northern infrastructure projects 06:30