Government says personal insolvency arrangements will not include ‘horrendous’ measures 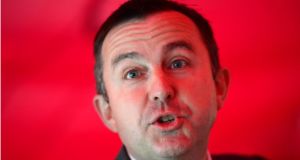 Minister of State Brian Hayes: “It would be a crazy circumstance if people were being forced out of the workforce to keep up payments.” Photograph: Dara Mac Donaill


A number of senior figures in the Coalition yesterday moved to reassure families struggling with unaffordable mortgage debt that the new personal insolvency scheme would not involve “horrendous” measures.

They were responding to reports that guidelines to be published after Easter by the Insolvency Service of Ireland might put pressure on one of the parents in a family to give up work should the costs of childcare exceed the income from their job.

“It would be a crazy circumstance if people were being forced out of the workforce to keep up payments,” said Minister of State Brian Hayes. “It’s a bit fanciful to suggest that. If that happens the Government will have to take action.

“If there are horrendous calls where people are forced out of the workforce we will have to look at it,” he said.

“It should not be the case that people are prevented from going out to work. I would expect that such a regime will not be allowed to proceed,” he said.

Common sense
Last night the Department of Justice also indicated that people would not be forced to give up work. “The Guide aims to strike a fair balance at all times between the insolvent debtors and their creditors,” it said.

The Government has conceded that households seeking to write down debt will have their personal budgets subjected to micromanagement. Items such as second cars, Sky Sports TV packages, holidays and medical insurance may be deemed as non-essential spending.

Minister for Jobs Richard Bruton said on RTÉ yesterday that debt resolution would require “sacrifices from . . . the individuals [involved]”.