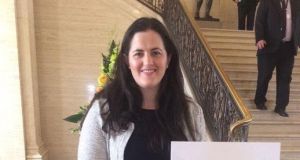 A new power-sharing executive will be formed in Northern Ireland after an independent Assembly member agreed to fill the contentious justice ministry.

The move ends any uncertainty over whether a new coalition would be formed in Belfast.

The other ministries will be shared out between the DUP and Sinn Féin during an Assembly sitting later on Wednesday.

With the Ulster Unionists and SDLP having opted to form an official opposition and the Alliance Party also deciding not to re-enter the power-sharing executive in the wake of the Assembly election, the DUP and Sinn Féin had faced somewhat of a quandary as to who would be justice minister.

Both parties previously vetoed the other taking the job, instead relying on the cross-community Alliance Party to fill the post.

Without a justice minister an executive would not have been formed and another election would have been likely.

Ms Sugden’s elevation from the opposition benches has avoided that scenario.

DUP First Minister Arlene Foster and Sinn Féin Deputy First Minister Martin McGuinness flanked the 29-year-old in the Great Hall of Parliament Buildings in Belfast as her appointment was confirmed.

Ms Sugden, the daughter of a former prison officer, said the job represented a “huge challenge” but she was “up for it”.

“This is probably the most difficult decision I have had in my life,” she said.

Mrs Foster said the independent MLA would be a minister for “all the people” of Northern Ireland.

“Martin and I are delighted that Claire has agreed to be the new justice minister in the new mandate and we are very much looking forward to working with her,” she said.

“I am equally as delighted as Arlene that Claire has agreed to take up this onerous responsibility, this very challenging position but we have every confidence in her ability,” he said.

Unlike most posts in the executive, the justice post can only be filled with the endorsement of a cross-community vote — meaning that a majority of nationalist MLAs and a majority of unionists must support the candidate.

A scheduled debate on her nomination followed, though her appointment was a foregone conclusion given the backing of the DUP and Sinn Féin.