Church has no records of burials at Tuam home, says archbishop 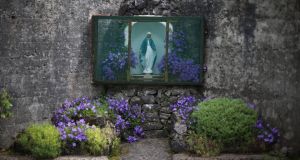 The site of a mass grave for children who died in the mother and baby home, Tuam, Co Galway. Photograph: Niall Carson/PA Wire

Archbishop of Tuam Michael Neary has said the church has no records relating to the burial of deceased children at a Co Galway mother and baby home as it had no role in its operation.

In a statement last night Archbishop Neary welcomed the establishment of an official cross-departmental examination into the burial arrangements following increasing pressure for an inquiry into the deaths and burial of almost 800 babies at a mass grave in Tuam.

However he said the Bon Secours Sisters who ran the home, had a “clear moral imperative” to “act upon their responsibilities in the interest of the common good”.

The diocese has committed to work with the sisters and will assist in a “suitable memorial” service.

“I was greatly shocked, as we all were, to learn of the magnitude of the numbers of children buried in the graveyard in Tuam,” he said in the statement released last night.

“I am horrified and saddened to hear of the large number of deceased children involved and this points to a time of great suffering and pain for the little ones and their mothers.”

“I can only begin to imagine the huge emotional wrench which the mothers suffered in giving up their babies for adoption or by witnessing their death,” the archbishop continued.

“The pain and brokenness which they endured is beyond our capacity to understand. It is simply too difficult to comprehend their helplessness and suffering as they watched their beloved child die.

“While the Archdiocese of Tuam will co-operate fully nonetheless there exists a clear moral imperative on the Bon Secours Sisters in this case to act upon their responsibilities in the interest of the common good.”

He said the sisters, as managers of the mother and baby home, handed over “material” to Galway County Council and health authorities in 1961.

“As the diocese did not have any involvement in the running of the home in Tuam, we do not have any material relating to it in our archives.”

When she conducted a search of the county council’s records she found that almost 800 infants and young children had died at the home during its years of operation between 1925 and 1961. Most of the children were buried in an unmarked plot next to the home.

Mr Corless and a committee has since arranged for a plaque to be erected at the plot.

Labour senator Lorraine Higgins said yesterday: “Now is the time for the church authorities to tell us where the rest of the bodies are.

“We need to know how many died in each of these homes throughout the country. We need details about each one of these children and where their resting places are.”