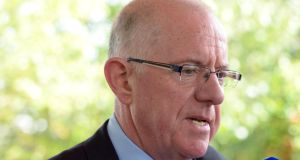 Charlie Flanagan: “The fact that 56 per cent of those who voted in Northern Ireland chose to remain in the EU does not mean that a majority of its electorate would similarly vote for a united Ireland.” Photograph: The Irish Times

Minister for Foreign Affairs Charlie Flanagan has again ruled out a Border poll in the aftermath of the Brexit referendum. He told the Seanad he understood the motivations of those who called for a referendum, as provided in the Belfast Agreement.

However, for such a poll to be held, the Secretary of State for Northern Ireland must judge it likely a majority of the electorate would opt for a united Ireland. At present, he added, there was no evidence to suggest that such an outcome would occur.

“The fact that 56 per cent of those who voted in Northern Ireland on Thursday chose to remain in the EU does not mean that a majority of its electorate would similarly vote for a united Ireland,’’ Mr Flanagan said. “They are two very distinct questions.’’

In the Seanad, Fine Gael Senator Neale Richmond warned against a “vengeful European Union’’ following Brexit. Fianna Fáil Senator Catherine Ardagh said the coming days, weeks and months would be some of the most important in the history of the EU.