Tanaiste responds to allegations made against suicide charity 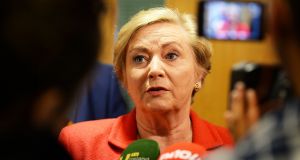 The Minister for Justice said the Attorney General has advised the proposed legislation is unconstitutional, contravening the provisions of the eighth amendment, which recognises the equal right to life of the unborn and the mother. Photograph: Cyril Byrne/The Irish Times

She told the Dáil on Tuesday CEO of the Irish Charities Regulator John Farrelly was in ongoing contact with Console’s trustees in seeking formal, written undertakings from the trustees that the property and finances of the charity were secure and subject to robust corporate governance.

The authority was also seeking an assurance that any allegations of financial impropriety would be investigated and a full report issued, she added.

“So it is very clear the charity regulator is playing a very active role,’’ said Ms Fitzgerald.

She added reports had also been sought from An Garda Siochana.

Ms Fitzgerald was replying to Fianna Fáil TD Sean Fleming, who said gardaí were investigating the use of Conole’s funds, some of which were allegedly used on trips of New Zealand for conferences for family members.

There had been allegations in the RTÉ Prime Time programme of breaches of company law and revenue regulations, he added.

The Tanaiste said it was critical confidence was maintained in the charity sector when donations were received and there was public fundraising.

“It is very distressing for people who supported an organisation like Console, dealing with a very sensitive issue relating to suicide and supporting families, that trust has been broken,’’ she added.

She said she was very concerned about the ongoing reports.

She said the HSE had carried out an audit on Console which had brought some of the concerns to light.

“The absolute priority for the HSE now is to ensure the ongoing provision of services,’’ Ms Fitzgerald added.