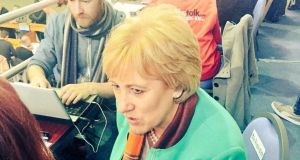 Minister for Arts Heather Humphreys at the Cavan-Monaghan count centre. She was the first TD elected in the constituency. Photograph: Aine McMahon.

Fianna Fáil’s newcomer Niamh Smyth has won the fourth and final seat in the Cavan-Monaghan constituency.

Ms Smyth was elected on the 10th count with 9,644 votes after Fine Gael’s Joe O’Reilly was eliminated.

There is a Fianna Fail tradition in her family; her grand uncle Paddy Smith was elected to Dáil Eireann at the age of 22 and was the longest serving Minister in the history of the State with 54 years of service.

Mr Ó Caoláin, the party’s health spokesman, took the second seat in the constituency on the ninth count after the elimination of his colleague Senator Kathryn Reilly.

Ms Humphreys was the first TD to be elected after exceeding the quota on the first count. He former party colleague Seán Conlan, now independent, failed to hold his seat.

On Saturday night actor Colin Farrell’s brother Eamon Farrell, who was invited to the Oscars in LA, chose instead to come to the glamorous surrounds of Cavan count centre to congratulate his friend Ms Humphreys.