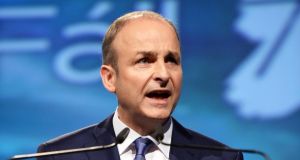 There have been mutterings about a challenge to Fianna Fáil leader Micheál Martin should the party not win the Carlow Kilkenny byelection. File photograph: Eric Luke/The Irish Times 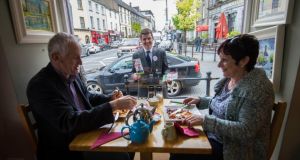 A candidate who has generated a lot of interest is Patrick McKee, Renua Ireland’s standard-bearer in its first electoral contest since being founded earlier this year. McKee, based in Kilkenny city and a former Fianna Fáil councillor, brought a lot of youthful energy and verve to his campaign. File photograph: Brenda Fitzsimons/The Irish Times

From the moment this byelection in Carlow-Kilkenny was announced, it was described as “Bobby Aylward’s to lose”.

For the Fianna Fáil candidate it was not a great position to be in. It’s like the chairman of a football club expressing full confidence in his manager, 24 hours before he gives him his P45.

For the candidate it can sound less a reality, more an epitaph.

This is the seventh byelection since the 2011 general election, and Fianna Fáil - ever the bridesmaid, never the bride - has finished runner-up in five of them.

Moreover, its performance in opinion polls has been less than stellar, and a sense of inertia, of a party treading water, did creep into this byelection campaign.

There were mutterings about a challenge to Micheál Martin should Fianna Fáil not win. It was pointed out that Aylward came from the old guard and was not really a shining symbol of Fianna Fáil renewal.

But the final tallies - if they are accurate - have Aylward at 28 per cent, some seven points ahead of his nearest rival, David Fitzgerald of Fine Gael.

Unless there are Gubu-style vote transfer patterns going on, he’s not going to be caught.

Byelections are curious beasts. They are second-tier polls and votes can be cheaply cast. People will vote for different reasons - giving the government of the day a kick in the pants; sending out a message about water charges; supporting a candidate contesting the seat of a relative who has died.

Fianna Fáil has not won a byelection in almost two decades, since the late Brian Lenihan jnr won the seat made vacant by the death of his father, also Brian, in 1996.

Of the six byelections held in this term, the only one that Fianna Fáil might have won was Roscommon-South Leitrim. But its candidate Ivan Connaughton did not really sparkle, and Independent Michael Fitzmaurice gathered critical momentum behind him.

Connaughton topped the poll but there was a gap of only 3 points between him and Fitzmaurice.

Fianna Fáil was flattened in Dublin in 2011 and could not really have expected to win out in the three contests that have been held there - two in Dublin West and the most recent in Dublin South West.

In the other two rural constituencies (Longford-Westmeath and Meath East), its candidates were contesting against the sister and daughter of two Fine Gael TDs who died in office.

If Aylward takes 28 per cent of the vote, it will be the same as the party’s share of the vote here in 2011. But it will take its victory in whatever manner it comes.

For Fine Gael, its share of the vote will have almost halved from 2011 and this might cause some concern about whether it can retain even two of its three seats.

The other big development is the strong showing of Sinn Féin’s Kathleen Funchion. If she matches the 15 per cent or 16 per cent share in a general election, she will win a seat in this massive five-seater constituency.

She is not a typical Sinn Féin candidate. Quiet and introspective, she is well regarded by colleagues. For a while there was talk that she might disrupt the hegemony of the two big parties - but Sinn Féin will be happy with this showing.

The other candidate who has generated a lot of interest is Patrick McKee, Renua Ireland’s standard-bearer in its first electoral contest since being founded earlier this year. McKee, based in Kilkenny city and a former Fianna Fáil councillor, brought a lot of youthful energy and verve to his campaign.

It was important for the new party that it could make some kind of impression of showing. He has polled 9 per cent, which is solid but not spectacular, and certainly puts him some distance away winning a seat next time round.

Renua will look at this campaign as a zero sum gain but will need to make some rapid advances in the public consciousness, for the sake of its long-term survival.

It was always going to be a difficult election for Fine Gael. The party is in Government, and as a general rule of thumb government parties tend to struggle in byelections. For a few days, Fine Gael thought it could run Aylward close. Fitzgerald was an energetic candidate and came out strongly in the public debates.

But while Aylward struggled in some of those live debates, that was more than balanced by his easy manner in one-to-one situations. He is likeable and personable, and did very well with the big rural and farming vote in the country.

It is inevitable that questions will now be asked within Fine Gael over whether it might have been wiser to run former IFA president John Bryan.

That said, the numbers from the local election last year showed Fianna Fáil at 38 per cent and Fine Gael at 29 per cent. With its rivals in the ascendancy, it would have been hard for any Fine Gael candidate to make up the ground.

Of the rest, the Greens’ Malcolm Noonan will be a little disappointed with his 5 per cent share of the vote.

Its candidate Willie Quinn did well in his native Carlow but his reach did not extend into Kilkenny. A 7.5 per cent return is hardly inspiring.

Independent Breda Gardner, based in Thomastown, amassed a respectable haul of votes.

Fianna Fáil will breathe a collective sigh of relief. It’s the first bit of positive news for the party in a long time. But one byelection does not a recovery make. The party has still some distance to go and time is very much against it.