Cabinet to meet in Lissadell House next week

Meeting will mark 150th anniversary of the birth of WB Yeats 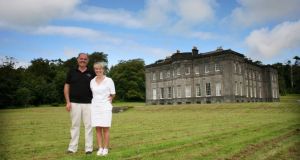 The owners of Lissadell House have described as a “singular honour” the Government’s decision to hold a Cabinet meeting at the historic estate next week.

A Government spokesman confirmed that “a full Cabinet meeting” would take place at Lissadell House next Wednesday.

“The Government feels it is entirely appropriate to mark the 150th anniversary of the birth of WB Yeats by holding the final Cabinet meeting of this term, in this historic house which is associated with Yeats and with Constance Markievicz, a titan of Irish politics,”he said

It is understood that the Cabinet will meet in the dining room of the house, the scene of Yeats’ poem In memory of Eva Gore-Booth and Con Markievicz in which he describes the “great windows open to the south” and recalls “that table and talk of youth”.

Sources said that the Taoiseach, who performed the official re-opening of Lissadell in June 2014, was very supportive of the idea to hold the Cabinet meeting there.

It comes just two months after Britain’s Prince Charles and his wife Camilla Parker Bowles visited Lissadell en route to Mullaghmore where the prince’s great uncle Lord Louis Mountbatten was murdered by the IRA 36 years ago.

Constance Cassidy said she and her husband Eddie Walsh were “absolutely delighted and honoured ” that the Cabinet would meet in Lissadell “especially in the context of 2016” .

The decision was welcomed by local Fine Gael TDs Tony McLaughlin and John Perry who pointed out that since it re-opened last year, Lissadell had seen a surge in visitor numbers.

“As we approach the commemorations for 1916, it is fitting that the former home of Countess Markievicz, a political icon who led Ireland‘s revolutionary fight for freedom and was our first female minister, will play host to a Cabinet meeting of this 31st Dáil,” added Mr Perry.

Barristers Eddie Walsh and Constance Cassidy bought Lissadell House from the Gore-Booth family in 2003 but following a legal dispute with Sligo County Council over rights of way, it closed to the public in 2009 for five years .