Cabinet to be addressed on legality of fatal foetal abnormalities Bill 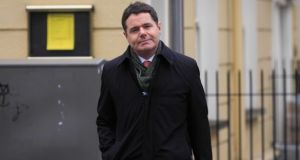 Paschal Donohoe: “It is unacceptable that families who have had to deal with fatal foetal abnormality have had to go to another country and then have to being back the remains of their loved in the boot of a car.” Photograph: Gareth Chaney/Collins

Minister for Public Expenditure Paschal Donohoe says the Attorney General will address the Cabinet next Tuesday on the constitutionality and legality of the private members’ Bill allowing for abortion in the case of fatal foetal abnormalities.

Members of the Independent Alliance have urged Taoiseach Enda Kenny to allow them to support legislation which was proposed by Independent TD Mick Wallace.

“The Attorney General will advise all Ministers and we will share that information with all our colleagues including the Independent TDs,” Mr Donohoe said.

He told Newstalk Breakfast that he felt very strongly that this was an issue that needed to be addressed in a more empathetic manner.

“It is unacceptable that families who have had to deal with fatal foetal abnormality have had to go to another country and then have to being back the remains of their loved in the boot of a car.

“This isn’t about fear, it is about doing the right thing.”

The legislation,which will be debated in the Dáil next week, will be the first test of Government cohesion.

It is understood the alliance, which includes Minister for Transport Shane Ross and Minister of State at the Department of Health Finian McGrath, met on Tuesday and agreed that a free vote was needed.

Minister of State at the Department of Jobs John Halligan confirmed he would back the Bill. “Providing the Bill is constitutional, I will be voting in favour of it,” he said. “Since I was elected I have called for a change in legislation to allow for terminations in these tragic cases. My position has not changed. I believe there should be a free vote.”

Minister for Children Katherine Zappone said she would await the Attorney General’s advice before making her decision on whether to support the Bill.

Mr Wallace’s Bill would allow for an abortion to take place in cases of fatal foetal abnormality. Under the measure, two suitably qualified medical professionals – a perinatologist and obstetrician – would be asked to certify, in good faith, if the foetus was incompatible with life.

Fianna Fáil will allow a free vote while Sinn Féin, Labour, the Social Democrats, Anti-Austerity Alliance-People Before Profit and the Green Party are expected to support the Bill.

The programme for government states Ministers and Ministers of State carry obligations of collegiate decision-making. It says Cabinet decisions made in response to Private Members’ motions will be collectively decided and will bind all officer holders.

A Government spokesman said there was an expectation the Independent Ministers would adhere to this pledge. He said the Taoiseach had made it clear a free vote would only apply after a citizens’ convention had reported and he did not anticipate that position to change.