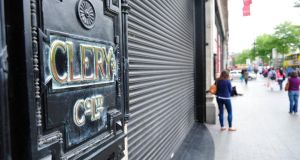 Tánaiste Joan Burton has described as “absolutely despicable” the treatment of workers at Clerys department store in Dublin who lost their jobs in Friday’s shutdown.

Ms Burton said the sudden closure, giving the 460 employees as little as 30 minutes notice in some cases, was “probably one of the worst examples of capitalism at its worst”.

She was speaking on Saturday in Kilkenny before presenting the Labour Party’s Jim Kemmy Thirst for Justice Award to striking Dunnes Stores workers who are locked in dispute with company owners over low-hours contracts and collective negotiation.

The Tánaiste hailed the workers at Dunnes Stores as an “example” for other workers. “They’ve been fighting for fair play. That’s why the cause of the Dunnes workers is the cause of every worker in Ireland.”

Before her speech, Ms Burton - who worked at Dunnes Stores while a student - said the company had always expected high standards of management and staff.

“To see the current dispute without a resolution, again I think it’s deeply disturbing. Irish people like shops like Dunnes Stores. It’s an Irish company, employing Irish people and it’s extremely disappointing that the management have not come to the table to resolve the issue by discussion and negotiation. In the end, that’s the only way trade disputes can be resolved, by discussion and negotiation.”

She pointed out that legislation introduced to the Dáil by Minister of State for Employment Ged Nash is designed to strengthen employees’ collective bargaining rights, among other measures.

In relation to the closure of Clery’s in Dublin following its sale by owners Gordon Brothers to the Natrium consortium, Ms Burton said everybody was in “shock” at the move.

“I have to say it’s an absolutely despicable way to treat any set of workers, all the more shocking in that some of the workers involved have been working in the company for 40 years and more and shown the utmost loyalty throughout all the difficult times when there were difficulties for the shop.”

She said the Department of Social Protection will be putting any supports possible in place for the staff losing their jobs at Clerys but, “because the locks were just put on the door,” this can’t be done onsite and will be facilitated elsewhere during the week.

Mr Nash called on the new owners of Clerys to “engage immediately” with the workers who were abruptly laid off . He described the way in which they have been treated as “cold and callous” and said he planned to meet them and their trade unions, Siptu and Mandate, as soon as he could.

Saturday’s award presentation was made in memory of long-serving Limerick-based left-wing TD Jim Kemmy and was the main event at the Tom Johnson Summer School organised by the Labour Youth Executive on the theme of “the future of social justice”.

The award was received by a group of workers representating the Dunnes Stores staff in dispute, along with union representatives.

Karen Wall of Mandate said employees were “waiting with bated breath” for the new industrial relations legislation, “so we can deal with this type of employer”.

In her address, Ms Burton said economic growth and individual wellbeing need not be at odds with each other, and following “one of our most historic successes” in the marriage referendum, it’s time to turn to raising “the living standards of our people” while in government.

The over-riding task on entering government was to fix the economy, she said. “And we did — in a very short space of time. That now gives us the platform to deliver economic and social justice — because like I said, the two go hand in hand. It means taking the fight directly to low pay, precarious work, and the cost of living. It means taking the fight to the enemies of fairness and dignity for the working families we serve.”