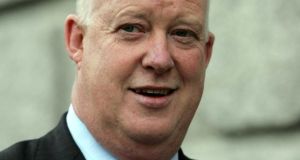 Gone from his former post as secretary general of the Department of Justice since July of last year, Brian Purcell was moved to the new position as head of compliance in the Health Service Executive just under 12 months ago.

He is one of the most experienced senior civil servants in the State.

He has also gone much further in the line of duty than others and paid a heavy price, having been shot by the gang leader Martin Cahill, also known as “The General”.

His was the third high-profile departure from the key justice and security posts in the State since the policing scandals began closing in on the Government and Garda about three years ago when Garda whistleblowers made more and more noise.

The allegations they made, mostly about the termination of penalty points, need not have cost any of the departed men their jobs. No corruption has been uncovered.

But there was unwillingness in the upper echelons of the Garda and Department of Justice to acknowledge reform was needed in the areas the whistleblowers were pointing to.

The former minister for justice Alan Shatter, former Garda commissioner Martin Callinan and Mr Purcell were all squeezed from office because of the disastrous handling of the allegations – some would say cover-up – rather than because of the seriousness of what was being alleged.

Mr Purcell found himself at the centre of the political controversy surrounding the 16-day gap in March of last year between his office receiving a warning letter from Mr Callinan about the system of Garda recording calls and Mr Shatter receiving that letter.

The delay occurred despite Mr Callinan requesting the letter be brought to Mr Shatter’s attention.

In his defence, Mr Purcell took a break from work at the time that coincided exactly with Mr Shatter’s ministerial St Patrick’s Day extended trip overseas. He was also grieving the death of his mother at the time.

However, others who know Mr Purcell described him as a micro-manager.

They suggested it was possible that because he insisted on directing everyone around him so closely his office stopped working when he was absent in March 2014 and that the letter was delayed as a result.

And just as details of that delay were emerging, it was Mr Purcell who was sent by Taoiseach Enda Kenny to the home of Mr Callinan in late March 2014.

He was sent to explain to him the difficulties caused in Government over his use of the term “disgusting” to describe the Garda whistleblowers and of the emerging scandal around the recording of calls to Garda stations for several decades, unknown to the public.

Mr Callinan made the sudden decision to retire just two days after Mr Purcell’s contentious visit to him.

In the debate that followed, the letter sent to Mr Purcell but not passed on to Mr Shatter emerged and Mr Purcell became mired in controversy; a position he never recovered from.

The Guerin report into the Department of Justice’s handling of the whistleblowers’ allegations – on penalty points and malpractice in Cavan-Monaghan – emerged in September of last year and was highly critical of the department. Mr Shatter resigned at once ensuring Mr Purcell remained on the ropes.

The new Minister for Justice Frances Fitzgerald was appointed and refused to express confidence in Mr Purcell, saying she would wait until a report into the workings of the Department of Justice was available to her.

He took the well-worn path to the job of secretary general, coming from director general of the Irish Prison Service.

Some 15 years ago, when he worked as a higher executive officer in the Department of Social Welfare, he signed the paperwork stopping weekly dole payments of £92 to the Dublin underworld figure Martin Cahill.

As a result, Mr Purcell was abducted from his Dublin home by four hooded men, who tied up his pregnant wife.

They drove Mr Purcell to Cahill. The criminal shot him twice in the legs.

He sent Mr Purcell a get-well card in hospital that read: “The General prognosis is good.”

Mr Purcell made a full recovery and went on to resume his career, spending time in the prisons division of the Department of Justice before becoming prison service director general in 2004.

His tenure as director general coincided with the darkest days of the prison system, with the gang culture, rising levels of violence and drug smuggling.