Brexit: What is article 50 and why does it matter? 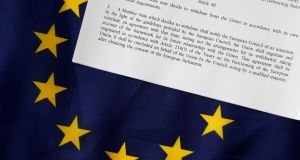 Article 50 of the EU’s Lisbon Treaty deals with the mechanism for departure. Photograph: Reuters

Article 50 - 250 words in five obscure paragraphs in a European treaty - has jumped to prominence in the wake of Britain’s referendum vote to leave the EU.

Article 50 of the Lisbon Treaty sets out how an EU country might voluntarily leave the union.

The wording is vague, almost as if the drafters thought it unlikely it would ever come into play. Now, it is the subject of a dispute between EU leaders desperate for certainty in the wake of the Brexit vote, and Brexiters in the United Kingdom playing for time.

Article 50 says: “Any member state may decide to withdraw from the union in accordance with its own constitutional requirements.”

It specifies that a leaver should notify the European council of its intention, negotiate a deal on its withdrawal and establish legal grounds for a future relationship with the EU.

On the European side, the agreement needs a qualified majority of member states and consent of the European parliament.

The only real quantifiable detail in the article is a provision that gives negotiators two years from the date of article 50 notification to conclude new arrangements.

Failure to do so results in the exiting state falling out of the EU with no new provisions in place, unless every one of the remaining EU states agrees to extend the negotiations.

No country has ever invoked article 50 – yet.