Brexit: Fear and loathing in Brussels

Inside Politics: EU leaders skip the denial stage of grief and go straight to anger 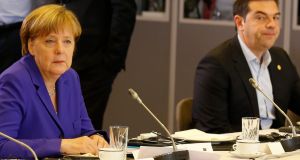 German chancellor Angela Merkel (L) and Greek prime minister Alexis Tsipras (R), at the start of the second day of the European Council meeting in Brussels, on June 29th, 2016. EU leaders met on June 28th for the first time since the British referendum, in which 51.9 per cent voted to leave the European Union. Photograph: Pascal Rossignol/EPA

Actually, as we reported yesterday, there is zero chance of English ceasing to be one of the EU’s languages. But the story was a good example of two themes that are common in Euro-land right now. The first is an overwhelming sense of uncertainty and apprehension about the future of the EU in the wake of the Brexit bombshell. The second is anger at the British for the grievous wound they have inflicted on the EU project.

These two themes have been evident at the emergency Brussels summit this week, as our comprehensive reporting has made clear. Today’s reports are here, here, and also here.

All our Brexit coverage is gathered on a dedicated micro-site here.

If the EU is currently going through the five stages of grief: denial, anger, bargaining, depression and acceptance - then many EU leaders have skipped the denial and gone straight to the anger stage. In Britain, many Remain voters have skipped straight to depression. Quentin Peel writes that Brexit “feels like a coup d’etat by the old and middle aged”.

But it is the bargaining, when it comes, that will be the important bit. There are two sides to this process: the negotiating over the terms of the British exit, and the efforts to reach agreement on what kind of a relationship the EU has with Britain after the formal exit.

Britain wants to start talking about the latter now, but EU leaders are insistent that no negotiations can happen until the Article 50 process - the treaty provision which governs any exit from the union - is officially triggered by the British.

The (outgoing) British prime minister David Cameron has said that he will not do that, as it is more properly a decision for his successor, who will have to define and articulate exactly what it is that Britain wants.

But Mr Cameron’s successor (for which nominations close today) will not be in place until September. So, like it or not, Europe must wait for the grey suits and grandees of the Tories’ 1922 Committee to run its leadership election. You can imagine how that is going down in Brussels.

Where is Ireland in all of this?

As our political editor Stephen Collins has been reporting from Brussels this week, Enda Kenny has been energetic in pressing the case about Ireland’s special relationship with the UK, but has also stressed the need to maintain the principles of the single market. But what if those two imperatives come into conflict?

Talk to those involved and they all use more or less the same description: it is a balancing act.

This is a delicate and nuanced process. Ireland will remain a committed member of the EU; that national policy is settled. But the relationship with the UK is our most important one, not just because of the North, but because of the economic, political, social, cultural, personal and family links between the two areas. The two societies are vastly more intertwined than Ireland is with the rest of the EU. Whatever the post-Brexit relationship between the UK and the EU is, the Irish Government will seek to have that reality recognised. Some clever diplomacy is going to be required, to say the least of it.

There is life beyond Brexit

You could be forgiven to think that there is nothing going on in political life except the B word. (That’s Brexit, not Boris).

But there is non-Brexit life too, of course. In fact, some rather important things have been happening in and outside the Dáil this week: the National Economic Dialogue between government, employers and unions at Dublin Castle; legislating for the suspension of water charges; the Government (with Fianna Fail’s help) ducking an inquiry into the sale of the Project Eagle loans by Nama; Bills to reform school admissions and on abortion, the latter which split the Cabinet on Tuesday and will have to be resolved this morning if the Government is to reach an agreed position. So, you know, there are some things going on.

Sarah Bardon writes about the abortion difficulties of the Cabinet here; either a deal is agreed in the new few hours or the Government will be in difficulty.

I spoke to some of those involved yesterday. They were certain that the Government would not be put in danger by the disagreement, but equally they were not certain that a compromise would be reached.

Fine Gael insists that the Attorney General’s advice had to be followed by Ministers, while the Independents were insisting on a free vote. As of now, the Government cannot agree a collective position. Unless the Independent Alliance Ministers relent then the Cabinet will have effectively rejected the Attorney General’s advice and she would have little option but to resign.

The compromise mooted is that the Independents would allow the Cabinet to reach a collective position in opposition to the Bill, but would abstain on the vote themselves. (They point out that have already secured a free vote on a Bill to ban hare coursing). This would be quite the fudge, but sometimes the necessary compromises of politics - and particularly of coalition governments - are expressed as fudges.

Harder to solve, I think, will be the differences with the secondary teachers’ union and the Garda over pay. Last night, Minister for Public Expenditure Paschal Donohoe reaffirmed that the emergency financial legislation under which public servants’ pay was cut - and then partially restored - remains necessary.

The Lansdowne Road Agreement provides for some restoration of increments - and supervision payments for teachers - for those who sign up to it and abide by its terms. The ASTI says it has not, and will not. Tomorrow, teachers and gardaí lose those entitlements.

So public servants who are agitating because their pay is not increasing quickly enough are now going to have it cut. If it was not for this Brexit business, everyone would be regarding this as the first big test of the Government. I expect the temperature on this to rise quite quickly today and tomorrow.