Both sides confident of win in Seanad referendum

Bruton and Martin make final pitches ahead of moratorium 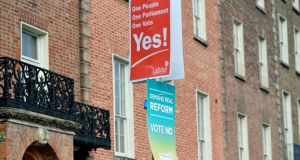 The two sides in the Seanad Referendum campaign have said they are confident their sides could pull off a victory tomorrow. Photograph: Frank Miller/The Irish Times

Fine Gael and Fianna Fáil this morning made the final pitches of their Seanad referendum campaigns ahead of a broadcast moratorium and tomorrow’s vote.

Minister for Jobs Richard Bruton, Fine Gael’s campaign director, said there was a compelling case for abolishing the Upper House as it was “an obsolete institution which has served the interests of the politicians much more than the citizens”.

Fianna Fáil leader Micheál Martin said he could sense a growing No vote as people on the doorsteps were saying they did not like the idea of more power being centred in the hands of the Government, should the referendum be carried.

Both men said they were confident their sides could pull off a victory. Recent polls show the Yes side ahead in the race, but a large number of people are yet to decide how they will vote.

An electorate of some 3.1 million people will vote on two referendums tomorrow - the 32nd and 33rd amendments to the Constitution - at about 6,000 polling stations across the State.

The proposals people will be asked to vote on are to abolish or keep the Seanad and whether or not to create a court of appeal. The court of appeal referendum has received support from all Oireachtas members and polls suggest it is likely to be carried.

Mr Bruton said the Fine Gael campaign had engaged really actively with people and that the number who appeared to understand the need for the Seanad proposition to be carried had grown as the debate on the issue came to a close.

He said Ireland would have a much better parliamentary democracy if the Seanad was abolished and the Dáil, “an institution elected by all of our citizens”, was reformed.

Fianna Fáil’s campaign director Niall Collins said he believed momentum was growing behind the No side as the campaign came to a close, as the public had seen the Fine Gael claim on savings arising from Seanad abolition “demolished” and the Government’s political reform agenda scrutinised.

Mr Bruton said his party’s campaign had relied on facts and figures provided by the Oireachtas Commission, which was “the only authoritative source”. He said the €20 million savings figure was correct and that Fine Gael had actually “erred on the conservative side” when it came to potential savings.

Mr Martin said he believed the referendum would be “very tight and very close”. “I’m very heartened by feedback we have got in last few days and certainly the No vote can win this.”