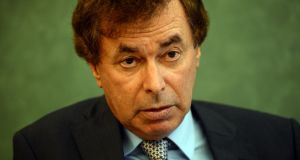 Alan Shatter: clashed with the Bar Council over the Legal Services Regulation Bill when he introduced it. Photograph: Cyril Byrne

Former minister for justice Alan Shatter has excoriated the Bar Council for fighting “tooth and nail” against every reform proposed for the legal profession, irrespective of their merits.

Mr Shatter, who stepped down in 2014, clashed with the Bar Council over the Legal Services Regulation Bill when he introduced it. The Bill, which has been amended by his successor, Frances Fitzgerald, introduces substantial reforms of legal services.The Government hopes it will be enacted before Christmas.

Mr Shatter said the Bar Council had attacked many provisions of the Bill, but especially those which would have allowed barristers enter partnership arrangements. At present, a barrister is obliged to operate as a sole trader.

He said the Bar Council’s opposition to the Bill was similar to its stance in 1994 when a law was introduced to allow solicitors to be appointed judges in higher courts, and in 1971 when solicitors were granted right of audience in the superior courts.

“The best way of describing the attitude of the Bar was that they fought every reform tooth and nail. They represented the Bill as if Armageddon was about to happen and that everything would cease to exist. At senior level, it is extraordinarily resistant to change.”

Mr Shatter added that there were “fixed theological views” within the Bar Council. “It’s unfortunate that they see anybody who wants any change as some kind of enemy.”

In his first detailed reaction to the Bill, Mr Shatter said he was happy with between 80 and 85 per cent of it, but had difficulties with some of Ms Fitzgerald’s revisions, which he said diluted key measures.

Praising the substantive part of the Bill, he said: “It should not lose sight of the fact that this is effecting really important revolutionary public-interest changes in the way that legal service are going to be administered, delivered and supervised.”

He said for the first time there would be comprehensive regulation of the legal profession through the Irish Legal Regulatory Authority.

“It will not only administer but will have a remit to look at crucial reforms necessary. One of the early things it will do is examine legal education in Ireland. ”

He said there was a need for an independent commission to be put in place for a long time, and was also pleased there would be an informal mediation system for complaints that were administrative rather than criminal. He said he was disappointed provisions that would allow barristers to go into partnerships with solicitors were now effectively off the table.