Minister says legislation will be laid out in ‘clearest possible terms’ 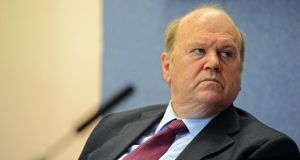 Minister for Finance Micheal Noonan has warned there will be sanctions against anybody who fails to appear before the planned banking inquiry. Photograph: Eric Luke / THE IRISH TIMES.

Minister for Finance Micheal Noonan has warned there will be sanctions against anybody who fails to appear before the planned banking inquiry.

Mr Noonan made his comments in Limerick today where he agreed that the former Anglo Irish Bank chief executive David Drumm should co-operate if he is part of any inquiry. Mr Drumm has apologised for using inappropriate language before the institution received a State bailout in 2008.

“Obviously if there is an inquiry and he [Drumm] is a relevant person, I think like everybody else he should co-operate fully with the inquiry.” Mr Noonan said. “There will be sanctions in the legislation that Brendan Howlin is bringing forward for persons who don’t co-operate so that’s an issue as well when he [Drumm] is contemplating his position.”

Mr Noonan also insisted today that the Minister for Expenditure and Public Reform Brendan Howling has laid out in the “clearest poissible terms” where the Government is going in terms of the banking inquiry and that legislation to establish it is being drawn up.

When asked if he is now prepared to release official records of the late night meeting between bankers and ministers that led to the bank guarantee scheme, given the public outrage over the Anglo tapes, Mr Noonan said this would have to be dealt with under the Freedom of Information process.

“Ministers don’t have any role is deciding what can be released under Freedom of Information. There is a designated officer within the Department and ministers wouldn’t even know what the Freedom of Information requests are, so we won’t interfere with the legal position on the releasing of documents,” he said.

The Sunday Times newspaper sought the only official record from the fateful night the bank guarantee scheme was agreed however it wasn’t released as the Department of Finance objected on 27 grounds.

Mr Noonan was speaking at the Graduate Medical School in the University of Limerick today, where a €40 million investment in the pharmaceutical sector was announced.