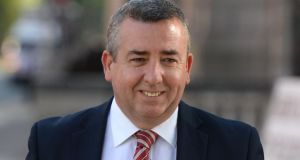 Ciarán Lynch: Mario Draghi blamed comments by the inquiry chairman for the withdrawal of the offer. Photograph: Martin Leissl/Bloomberg

Fresh divisions have erupted between the Oireachtas banking inquiry and the European Central Bank (ECB) over its refusal to answer to the committee.

Correspondence published on Wednesday on the ECB website shows its vice-president Vítor Constâncio has withdrawn his offer to attend an “informal exchange of views” with the inquiry regarding the crash.

The ECB resolved in February to allow Mr Constâncio to make an Oireachtas committee appearance but only if it took place outside the inquiry process. In a letter on July 23rd to Independent MEP Marian Harkin, ECB chief Mario Draghi blamed remarks by inquiry chairman Ciarán Lynch for Mr Constâncio’s refusal to appear.

“Recent developments, in particular statements made by the chairman of the joint committee of inquiry, suggested that the necessary clear separation between an exchange of views and the work of the committee of inquiry could not be guaranteed,” Mr Draghi said.

“Under these circumstances, accepting the invitation would have amounted to the ECB de facto participating in the inquiry and hence discharging accountability to the Oireachtas.”

In another letter that day, Mr Draghi asked European Parliament president Martin Schulz to consider a request from Irish MEPs for a hearing with the ECB on Irish banking matters.

In his correspondence with Ms Harkin, Mr Draghi copied a letter from Mr Constâncio on May 29th to finance committee chairman Liam Twomey.

“Referring to the exchange of views in which I would take part, he urged in a press release that ‘a written transcript of the meeting will be provided to the committee for evidence’, suggesting that my statements would be used as evidence in an inquiry in which the ECB does not participate.”

Such developments implied there would not be a “clear difference” between a finance committee hearing and the inquiry, Mr Constâncio said.