Ballot capers: Battle of the bands as ‘No Direction’ takes on Status Quo

Still a week to go, but some people’s thoughts are turning already to the Seanad elections 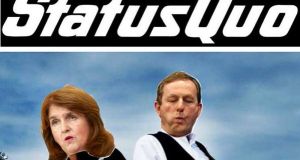 Tweeted by the AAA’s Paul Murphy, he scored a more palpable hit with this picture of Enda and Joan as guitar-wielding members of Status Quo.

BAND ON THE RUN Nice to see some maturity at last in the electoral debate as it enters its final week. “The Labour Party so out of touch they don’t even know there are four members of One Direction,” Renua leader Lucinda Creighton tweeted in response to a newspaper ad showing five of Labour’s opponents, including Ms Creighton, as members of “No Direction”. The official Labour account retorted: “It’s obvious you’re Zayn & given your history you’d be first to leave.” But the AAA’s Paul Murphy scored a more palpable hit when he tweeted a picture of Enda and Joan as guitar-wielding members of Status Quo. Were we alone in wondering why no Soc Dems featured in Labour’s boyband nightmare?

GET A ROOM, GUYS Comedy writer Trevor Browne stayed up all night to create a fantastic speed-dating “Election Tinder” for every candidate in Dublin. Just tap the high-speed carousel of pictures at any point and you’ll be matched with your personal lovely election hopeful. Ballot Capers tried it out and ended up with Seán Haughey. This could be the start of something beautiful . . .

QUOTE OF THE DAY This is a man who has to take his shoes off to help him count to 20. – Labour’s Ged Nash on Gerry Adams

GET OUT OF DODGE Voters in Dún Laoghaire are being presented with copies of the Dodge City Gazette, a satirical (one presumes) pamphlet from the Dún Laoghaire Rate Payers Association (DLRPA), a local ginger group which, to judge by the Gazette’s contents, believes the venerable borough is going to hell in a handbasket. Among the things it doesn’t like about the town are the traffic wardens, the bins, the market in Dún Laoghaire Park and the still relatively new Lexicon Library. The one thing the group doesn’t do is tell you whom it thinks you should vote for . . .

SEATED AND UNSEATED Bad news for the Government parties in Clare, where a poll by the Clare Champion predicts Fine Gael’s Joe Carey and Labour’s Michael McNamara will both lose out, with Sinn Féin’s Noeleen Moran and ‘No Doctor, No Village’ candidate Dr Michael Harty winning seats. Fine Gael’s Pat Breen and Fianna Fáil’s Timmy Dooley (left) are projected to retain their seats.

Meanwhile, following last week’s TG4 poll in Donegal, a new survey by the Tirconaill Tribune shows support for Independents surging to 31 per cent, and Fine Gael’s Minister of State Joe McHugh struggling to retain even one seat for the party (it won two across the two old Donegal constituencies in 2011).

HIGHER THOUGHTS Still a week to go to polling day, but some people’s thoughts are turning already to higher things. The Standards in Public Office Commission has issued its Guidelines for the Seanad General Election which will follow the election of the 32nd Dáil. The guidelines lay out the limits on the amounts of money which may be donated to an individual or party campaign and the legal reporting requirements for all candidates’ financial records. Just think that, if Enda had had his way, the referendum to abolish the Upper House would have come into effect and we would have had nothing to look forward to.

You are looking forward to it, right?