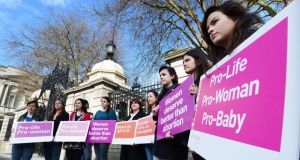 Members of the Pro-Life campaign outside the Dáil yesterday. Photograph: Alan Betson

The Cabinet finally signed off on the abortion legislation last night, but the length of time it took to reach a conclusion was an indication of just how thorny a political issue it has become once again, 30 years after the constitutional protection for the unborn was inserted in the Constitution.

While public opinion on the whole issue of abortion has moved a long way since then, it remains a divisive issue in Irish politics as the latest saga has demonstrated.

The recent leaking of counter proposals about the number of doctors that will be required to make a decision on whether the threat of suicide by a pregnant woman should constitute grounds for an abortion only added to the difficulty.

The words “abortion” and “suicide” do not appear in the Bill. Instead the words “termination” and “self-destruction” are used.

More importantly, the number of doctors who will make a decision on suicide will remain at three for an initial decision and another panel of three to consider any appeal.

One of the problems that created confusion in both Coalition parties over the past two weeks is that most Fine Gael and Labour TDs did not know what was going on.

The discussions about the shape of the legislation was restricted to a tight group involving Taoiseach Enda Kenny, Tánaiste Eamon Gilmore along with two Fine Gael Cabinet Ministers, James Reilly, and two Labour junior ministers, Kathleen Lynch and Jan O’Sullivan.

The result was that when the Cabinet met to consider the heads of the Protection of Maternal Life Bill 2013 yesterday, 11 of the 15 members had no knowledge of what had been agreed.

That meant that even if there was broad agreement around the Cabinet table, the meeting was inevitably going to take some time.

Rising tensions
The rising tensions in the Fine Gael parliamentary party and the printing of secretly taped conversations of two Labour TDs made by an anti-abortion campaigner added to the difficulty.

The intervention, for a second time in recent weeks, by former Fine Gael taoiseach John Bruton, arguing against the inclusion of suicide in the terms of the Bill was designed to make things more difficult for Taoiseach Enda Kenny.

The vocal anti-abortion faction in the party took enormous heart from Bruton’s intervention but it infuriated not just supporters of the Taoiseach but some of the middle ground backbenchers in the party.

Difficult times
“What John is doing is appalling,” said one senior Fine Gael TD. “He is purposely setting out to make things difficult for his successor.

“Compare his behaviour with that of Liam Cosgrave who never once uttered a comment that could embarrass any of [his] successors in the Taoiseach’s office despite his deeply held views on moral issues.”

One of the real problems is that the vast majority of the Fine Gael parliamentary party were not aware of the contents of the Bill until it was published last night.

That left them open to pressure from anti-abortion lobby groups and to political manoeuvring by colleagues.

The preemptive strike by Galway West TD Brian Walsh, who announced that he would not be able to vote for any legislation that allowed for suicide put colleagues with conservative views under pressure.

However, the details of the Bill that emerged last night should have calmed the nerves of many of the middle ground Fine Gael TDs.

While the suicide issue was included, as expected, the proviso that an initial decision would be made by a panel of three medical experts, with any appeal going to another panel of three, was designed to reassure people that it will not lead to abortion on demand.

It appears that the position taken by James Reilly throughout the negotiations with his Labour colleagues was vindicated despite all the toing and froing over the past few weeks. That should help him and the Taoiseach to persuade waverers that the Bill is as restrictive as possible and does not amount to an open door to abortion.

Despite these safeguards Fine Gael will probably lose some TDs overboard when the full Bill is finally voted on by the Dáil.

Some worried TDs genuinely believe that the suicide option will open the door to abortion on demand and will take some persuasion that the Bill will not do that. Others will avail of any opportunity to take a swipe at the party leader.

Cast out
How many will be willing to risk being cast out of the parliamentary party is another matter.

Much will depend on how the Bill is presented and what the public reaction is.

For the moment, though, the Taoiseach and Tánaiste will be happy that the heads of the Bill have been agreed.