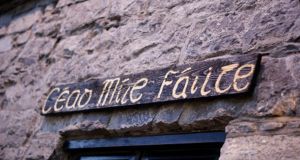 Dublin Bay North delegate Jeff Johnson, who said he would speak in English “so people can understand”, told the Fine Gael ardfheis on Saturday that the party had caused a lot of controversy with its Irish language policy and “it’s an awful pity, especially in the last five years”.

He said “we’ve lost members in Dublin Bay North and it’s led to protests outside Fine Gael headquarters and Conradh na Gaeilge emailing their members and anyone affiliated with them not to vote for the party”.

Fine Gael backed his motion to officially recognise a Comhairle na Gaeilge affiliate group to propose Irish language policy to the parliamentary party and the ardfheis, to promote the use of the language within Fine Gael and to highlight that “Fine Gael is a party deeply committed to An Gaeilge.

The group had been acting unofficially and “we would like it to be officially supported by the party”.

Mr Johnson said “those who founded the State and went on to found the party were heavily involved in Conradh na Gaeilge”.

“Even the party’s own name is taken from the Irish,” he added.

He said it was fortunate that a manifesto pledge at the last election to end compulsory Irish in the Leaving Certificate did not go ahead.

He said there had been a lot of progress and commended Minister of State Joe McHugh as Minister for Gaeilge Affairs because he had “made great effort and been very impressive”.

Mr McHugh’s appointment was controversial because of his lack of Irish, but he had learned the language on the job.

National executive candidate Eileen Lynch told about 100 people in the auditorium for the debate that “Irish is constitutionally our first language. It is a recognised European working language. While we have made great strides within the party, it is still something we need to strongly support.”

She said “it is important that we do all we can to promote Irish”.