Analysis: How will a government be formed after election upheaval?

After election upheaval, the main focus of speculation is on a Fine Gael/Fianna Fáil coalition, but is it likely to happen? Harry McGee, Stephen Collins and Sarah Bardon discuss. 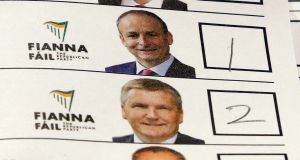 Micheál Martin has said he will act responsibly. That could involve him allowing a Fine Gael -led minority government to govern under certain conditions. Photograph: Chris Radburn/PA Wire

How will a government be formed after an election upheaval that altered the political landscape once again?

That is the big question that will dominate political speculation in the days ahead and it will take some time for any degree of clarity to emerge.

Back in 2011 when Fianna Fáil was swept aside in a deluge that saw it lose 80 per cent of its seats many pundits forecast the demise of the party.

Now five years on the party is back in the game with around double the number of seats it won in 2011.

This time it is the Labour Party which has suffered annihilation and there are doubts about the capacity of the party to survive.

The tide has gone out for Fine Gael and it will be lucky to break the 50 seat barrier when all the votes are counted, while Independents and smaller parties will be coming to the Dail in record numbers.

All of that makes it impossible to predict the shape of the next government or indeed whether there will be one at all.

The main focus of speculation is on a Fine Gael/Fianna Fáil coalition but there are serious obstacles that could well make that impossible and the old cliché that it is all about the numbers does not necessarily apply.

For a start a handful of outgoing Fianna Fáil TDs have stated their implacable opposition to a coalition deal with Fine Gael and some have even threatened to leave the party if it happens.

Then there is the small matter of a special party ard fheis that would be required to endorse a coalition. If Micheál Martin went into that ard fheis proposing coalition and lost his leadership could go with it.

At the back of minds in both Fianna Fáil and Fine Gael is the prospect that a coalition between them would create a massive opening for Sinn Féin and the hard left parties to emerge as the alternative government with every chance of taking power when the next election comes around.

If the two big parties won’t come together, what about the prospect of Fine Gael and the remnants of Labour putting together a deal with the wide variety of Independents that will be elected.

If the outgoing Coalition can stagger back with 60 seats or so it is possible that Enda Kenny could still be elected Taoiseach on March 10th with the backing or even tactical abstentions on the part of some of the Independents.

That would not make for a very stable government and it is hard to see how it wold last for long.

That brings back the question of what Fianna Fáil will do. Mr Martin has said he will act responsibly. That could involve him allowing a Fine Gael -led minority government to govern under certain conditions.

This is a regular feature of continental politics and there was a brief experiment with it here between 1987 and 1989. One way or another we will be into uncharted territory.