Analysis: Dramatic developments but bailout exit will give big boost to Government

Coalition leaders take some quiet satisfaction from this announcement 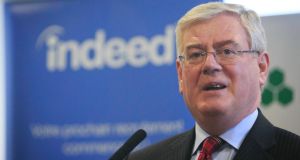 Tánaiste Eamon Gilmore: described the exit as an important milestone and a historic decision

Dramatic and highly-choreographed announcements have become the stock-in-trade of this Coalition. Yesterday’s announcement that Ireland would exit the bailout without a precautionary credit line followed that pattern: an emergency Cabinet meeting followed by statements in the Dáil followed by a media blitzkrieg.

It allowed Government total control of the agenda. It had good news to announce and it wanted to be sure it did so on its own terms.

Some three years after the event, and 32 months after taking power, Taoiseach Enda Kenny and Tánaiste Eamon Gilmore could say Ireland was to regain sovereignty, and was now big and confident enough to ride the bicycle without stabilisers.

There was inevitably an element of braggadocio but then it was a good day for the Government.

Statements
That said, there was a conscious and deliberate effort by Kenny and Gilmore in their short statements not to sound overly triumphant or self-praiseworthy. Kenny emphasised there was “still a long way to travel but [WE ARE]moving in the right direction.

“This does not mean the end of difficult economic decisions. There are still difficult times ahead,” he said, cautioning against any windfall.

The Tánaiste struck a similar sober note. He described it as an important milestone and a historic decision but added there would be no celebration until economic recovery was experienced in the daily lives of the people.

From a domestic political perspective, the strengthening wind gathering behind the backs of the Coalition continues to gather pace.

Realistic
It is not too much to describe yesterday as a defining moment for this Fine Gael and Labour coalition. For the first time the prospect of its re-election, as an entity, became realistic and attainable.

Of the two parties, it is Labour which has borne the brunt of adverse public reaction to some of the harsh measures introduced by the Government. The party will hope that that yesterday’s announcement, allied to a little more flexibility from next year onwards in terms of spending, will help it to recover a lot of that ground.

For the opposition, there is little that can be done in these situations other than to keep one’s head low and accept the loss.

Fianna Fáil leader Micheál Martin ill-advisedly carped at the Government in his Dáil response. The party made some substantial points about leaving the bailout without a backstop from the EU.

Questions
Some €53bn will be needed between now and 2016 but less than half of that has been raised so far. There are also questions about the German role in this, in backing the “clear break” and in the involvement of a German state investment bank.

Bur for Martin and Fianna Fáil, it was the wrong moment to make those arguments. The tone was wrong and the message was discordant.

As Alan Shatter noted acidly, it was like listening to a burglar giving advice about house insurance.

Judged on its merits, it does amount to a pivotal moment. The Government will have few better days.