Opinion: Limits on flying flag do not enhance Irishness but succeed in diminishing Britishness 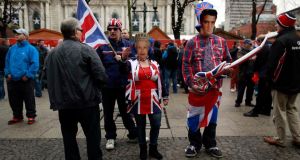 Loyalists in fancy dress march from City Hall in Belfast to mark the first anniversary of the council’s decision to restrict the flying of the Union flag. Photograph: Reuters

In Dervock and Ballybogey, Bushmills and Ballymoney, and all across north Antrim the Union flag still flies. Four hundred years after a Scottish king authorised the plantation of Ulster the descendants of those settlers still mark out their territory, assert their difference and signal their defiance.

For the citizens of most nations, a flag, if thought of at all, is a taken-for-granted source of pride. Travelling through Britain or the Republic one rarely notices the flag, and when one does it is usually in a happy context, a symbol of inclusiveness, of welcome, of openness. Here in the Black North it is all quite different.

Battle flag
The tattered flag lashed to a lamppost in Rathcoole, or flying proudly over Ahoghill Orange Hall, does not speak welcome but survival. Outsiders trying to understand why the Haass talks were necessary and why, of all the issues it encountered, the flag proved so intractable, need to understand this: the Union flag for many in the North is not just a symbol of political sovereignty, it retains the original purpose of a flag – it is a battle flag.

Four hundred years is a long time to fight a war. All our politicians grew up in it, were formed by it – many even participated directly in it. To bring down the flag then, to restrict its flying to designated days or places, to have to apply for a licence to fly it, speaks not of success or even acceptance but of defeat and humiliation.

Perhaps in the 1990s, when Sinn Féin began its campaign against Orange parades, it did not foresee how this would be perceived by its Protestant neighbours; perhaps too the decision to limit the flying of the flag over Belfast City Hall was ill-advised. These decisions do not enhance the “Irishness” of the North but symbolically diminish its “Britishness”.

Surely Irish nationalism should have more to offer than this? An inclusive Ireland must have room for Britishness; it must recognise it, even embrace it. To strike at the symbols of unionist survival, to demand after 30 years of war they pull down their flag, is not just to demand too much too soon, it is to fail to recognise unionists’ suffering, their history, their identity.

Perhaps then Haass’s recommendation “to kick the can down the road” in the form of establishing a commission on identity, culture and tradition was the best that could have been achieved in the circumstances.

Petty symbolic victories
I hope unionists eventually let the flag go; that in the end the flag becomes as unnoticed and as unremarkable as it is in most nations. But former enemies demanding its removal, seeking petty symbolic victories at the expense of substantive change, is one way to ensure that will never happen.

Just as unionists must learn to accept an Irish identity – and an Irish language Bill would be a good start – so those interested in true Irish unity must realise their task should not be to attack unionist identity but to recognise it and build an Irish identity that can include it. As the late PUP leader David Ervine used to say: “The British presence in Ireland is not the army, it is us.” Until Irish nationalism recognises that, the flags of north Antrim will keep flying.

Richard Irvine is a history teacher and lecturer in Belfast, and an independent commentator