Outgoing Minister hopes Brendan Howlin will be next Labour leader 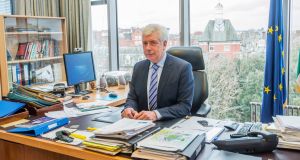 Minister for the Environment Alan Kelly’s pre-election reference to power as a drug was “ill-judged” and Brendan Howlin should secure the Labour leadership, Minister for Communications Alex White has said.

Mr White, who lost his Dublin-Rathdown seat, said it was his constitutional duty to remain in Cabinet until a new government was formed. He added that he would not miss any of the trappings of power.

“I find that hackneyed old nonsense about power being a drug . . . The notion of power for its own sake is objectionable in a democracy,” he said. “Power is something that you are given for a purpose to carry out certain tasks and objectives in the interests of the people. If it becomes a drug, or if it becomes something in and of itself . . . you need to think twice about what you’re at.

“Power has to be exercised in a democracy with a certain amount of humility. That doesn’t mean that it’s any less purposeful, but if you think it’s something that’s desirable for its own sake, I think you’re wrong.”

When Mr Kelly was interviewed in the Sunday Independent in January, he described power as an attractive drug that suited him and one he thrived on. He said he was his “own boss”, rather than Tánaiste and Labour leader Joan Burton being his boss. “I thought that interview was ill-judged,” Mr White said yesterday as he prepared to return to work on energy policy in his departmental office on Adelaide Road in Dublin.

Mr White had an “emotional” meeting with Ms Burton on Tuesday and did not know what her intentions were, but if she did not continue as party leader, he hoped Mr Howlin, the Minister for Public Expenditure and Reform, would put his name forward.

With 25 Labour TDs losing their seats at the weekend, Willie Penrose’s re-election in Longford-Westmeath yesterday brought to seven the number of TDs returned in a bruising election for the party.

“I personally would be hopeful that Brendan Howlin would step forward,” said Mr White. “I think somebody like Seán Sherlock also has a lot of strengths, but I would be hopeful . . . that Brendan would take it on. He is clearly the best option for the party were Joan not to continue as leader. There’s no question in my mind that he is, by a long shot, the strongest, most credible person that we have now in that team of seven.”

Mr White challenged Ms Burton for the Labour leadership in June 2014. He said that Fianna Fáil and Fine Gael now had a duty to coalesce, and that there was no such thing as a coalition without broken promises.

Mr White said Labour failed to communicate conflicts that took place within the Government because the Coalition partners were trying to present a united front at a time of crisis. “So we didn’t tell people the fights that were happening, and I know there were enormous fights, including over water,” he said. “Compromises were made, but it would have been better if they had, to some extent anyway, played out in public a bit more.”

Mr White said it was too soon to decide what he should do next. If another election took place very soon, he would seriously consider running again. “I do have to make a living and I found working as a barrister extremely fulfilling and interesting, and I may well go back to the Bar,” he said.

Referring to his Cabinet position, he added: “There is nothing about the trappings of the job that I will miss.”