New Minister to be appointed today

Minister for Justice Alan Shatter has resigned, Taoiseach Enda Kenny has told the Dáil this evening.Mr Kenny said Mr Shatter stepped down as a result of the inquiry by Séan Guerin SC into allegations of Garda malpractice. 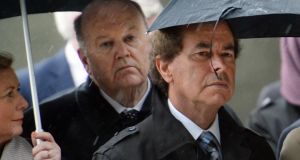 Taoiseach Enda Kenny will appoint a new Minister for Justice today following the shock resignation of Alan Shatter, one of the leading figures in the Coalition.

The departure of Mr Shatter represents a severe blow to a Government that was widely lauded for its competence during its first three years in office.

Mr Kenny told an astonished Dáil chamber yesterday evening that Mr Shatter stepped down as a result of the inquiry by Seán Guerin SC into allegations of Garda malpractice.

“I can advise the House that the report is critical of the inadequacy of the actions taken by a number of the agencies, notably An Garda Síochána but also including the Department of Justice and Equality and the Minister for Justice in responding to the allegations made by Sgt Maurice McCabe,” Mr Kenny told TDs.

He added that the 300-page report concluded that a comprehensive commission of investigation was required.

The Guerin inquiry was established by the Government following the presentation to the Taoiseach by Fianna Fáil leader Micheál Martin in February of a dossier containing a range of allegations made by Garda whistleblower Maurice McCabe. The Guerin report will be published tomorrow and the Government will respond to it next week.

Mr Kenny said that the report pointed out the inadequate response of Mr Shatter under his statutory function for independent investigation.

“In that context, the Minister has accepted responsibility and has taken the course of tendering his resignation.’’

The Taoiseach said he had received the Guerin report on Tuesday evening and Mr Shatter and himself had considered its contents yesterday.

Mr Kenny and Tánaiste Eamon Gilmore were in contact during the day about the contents of the report and Mr Gilmore was called out of a Labour parliamentary party meeting at 4.20pm to be told that the Minister was resigning.

Government sources were adamant last night that Mr Shatter’s decision to resign was his own and that he was not pushed into it by the Taoiseach or other members of the Government.

There was some speculation that Minister for Transport Leo Varadkar might be asked to take on the role but Minister for Children Frances Fitzgerald and Minister for Agriculture Simon Coveney were also tipped for the post.

Backbench suggestions
Some backbench TDs suggested that parliamentary party chairman Charlie Flanagan, who was Fine Gael justice spokesman in opposition, should be considered for the job.

Minister of State for European Affairs Paschal Donohoe was widely tipped by colleagues as the most likely candidate for promotion to the Cabinet, with speculation that the announcement for the new posts is being held over until today when he is due to return from Greece where he was on EU business.