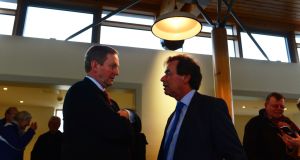 Former minister for justice Alan Shatter has said it is “not tenable” for Taoiseach Enda Kenny and the Government to continue to accept a report which led to his resignation from cabinet.

Mr Shatter has also sought to increase pressure on Mr Kenny by repeating his demand that he correct the Dáil record over the Guerin report, which the former TD said led the Taoiseach to “encourage” him to resign.

Mr Kenny last night declined to say he would do so, citing a legal issue as a reason.

Earlier yesterday, the Taoiseach’s spokesman said Mr Kenny accepted the conclusions of both the Guerin and O’Higgins reports, a stance Mr Shatter has rejected.

The Guerin report, which Mr Shatter believes seriously damaged his reputation, was a precursor to the O’Higgins commission of investigation, whose report was formally published yesterday.

It found Mr Shatter, former Garda commissioner Martin Callinan and the Department of Justice handled complaints by Sgt McCabe in a professional and appropriate manner.

Minister for Justice Frances Fitzgerald declined to apologise to either Mr Shatter or Mr Callinan, but said she had “sympathy” for them.

Mr McCabe, who was contacted by Ms Fitzgerald yesterday, is expected to make a detailed statement today.

Mr Shatter has claimed Mr Kenny “encouraged” him to resign in the wake of Guerin report, and has said the Taoiseach told him that he would not be able to express confidence in him if he did not do so.

Mr Kenny claimed Mr Shatter had his own reasons for resigning in 2014. “Insofar as Alan was concerned, he set out his reasons for his resignation by letter himself, which was published. I am happy that Alan has had his work as a minister confirmed by the O’Higgins report.”