Abortion will not be revisited during lifetime of Government, says Rabbitte 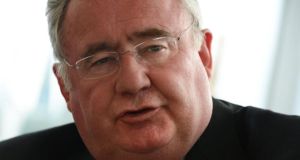 “I do not see us coming back to this issue in the lifetime of this Government,” Mr Rabbitte said

A senior Labour figure in Government has categorically ruled out the issue of abortion being revisited by the Coalition during its term of office.

Minister for Communications Pat Rabbitte yesterday confirmed that the Coalition would not broach the questions of whether abortion should be available to cover fatal foetal abnormalities, inevitable miscarriages, incest and rape.

“I do not see us coming back to this issue in the lifetime of this Government,” Mr Rabbitte said on RTÉ’s The Week in Politics.

During the debate on the report stage of the Protection of Life During Pregnancy Bill in the Dáil last week, a number of Labour Party TDs said they were in support of extending abortion laws to cover such cases. One TD, Michael McNamara, voted for an opposition amendment calling for such changes, but later said he had been mistaken in supporting the amendments.

A group representing women in Labour have also called for further changes: “Until we repeal the eighth amendment, thousands of Irish women will continue to travel to the UK to access the medical care that they need – women who receive a diagnosis of fatal foetal abnormality, women who have been raped, women whose health is in danger,” said its spokeswoman Sinéad Ahern.

Attorney General’s advice
Mr Rabbitte said yesterday the advice from Attorney General Máire Whelan was that the Bill could not be extended to include other circumstances or possible grounds without it being put to a referendum.

Separately, Tánaiste Eamon Gilmore is to have a meeting with Mr McNamara this week. The Tánaiste was in the US on Government business during the crucial vote on abortion and said he would be “listening” when he met the Clare TD. No disciplinary action was taken as Labour whip Emmet Stagg accepted that Mr McNamara had made a “genuine mistake”.

The Seanad debate on the Bill will commence this afternoon and will continue each day this week until Thursday.

The debate in the Upper House is likely to continue into Tuesday of next week,when it will have completed its passage through the Oireachtas.

Two Fine Gael Senators, Paul Bradford and Fidelma Healy-Eames, have said they will vote against the Bill, while the voting intentions of two colleagues, Michael Mullins and Michael Comiskey, are uncertain.

Asked yesterday if he agreed with Leo Varadkar’s opinion that President Michael D Higgins should refer the Bill to the Supreme Court under Article 26 of the Constitution, Mr Rabbitte said he had “every confidence that the President will listen to his own counsel and will reach his own decision.”

“One is the constitutionality which is just . . . full of landmines and I think nobody can predict,” she said in an interview with RTÉ’s Marian Finucane.

Ms Creighton also added that she would like the Protection of Life During Pregnancy Bill to be referred to the Supreme Court.

Expanding on her reasons for voting against the Bill, Deputy Creighton denied her stance was due to religious beliefs.

“For me it’s very simply a human rights issue . . . if you look at our Constitution it gives equal rights to the unborn child and to mothers,” she said.

In a column in yesterday’s Mail on Sunday, she also criticised the prevalence of group-think in society, the media and political life.

“Increasingly we are all supposed to think and speak the same way,” she wrote. “There is less and less room in this country for a diversity of opinion, for real and meaningful debate and for genuine analysis.”