Woman lied about clown attack ‘because she was late for work’ 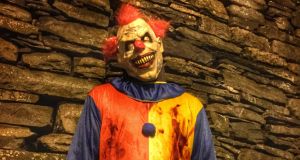 A number of frightening encounters with people dressed as clowns have been reported in the US and UK. Photograph: Willi Schubert/EyeEm/Getty Images

An 18-year-old Ohio woman lied about being attacked by a knife-wielding clown as an excuse for being late for work, police have said.

Officers in the Cincinnati suburb of Reading said investigators found inconsistencies in Alexsandra Conley’s story and charged her with making a false alarm.

Ms Conley said someone dressed as a clown jumped over a fence, waved a knife at her and cut her thumb.

There have been several recent reports across the US and recently in the UK of people having frightening encounters involving clowns.

Classes in the same town were cancelled for a day last week after it was reported that a woman was grabbed by the throat by a clown, who also threatened the schools.

In a separate incident in the US last month, police said a fearful 11-year-old Georgia girl who took a knife to school told officers she needed the weapon to fend off clowns.

The girl was arrested at Burney-Harris-Lyons Middle School in Athens amid reports and social media posts about clowns frightening children in Georgia and other states, the Athens Banner-Herald reported.

A police report stated the girl said she needed the knife to protect her and her family because she had heard the stories about clowns jumping out of the woods and attacking children.

Police said they released the girl to her mother on a charge of possession of a weapon on school grounds.

More recently and closer to home, a teenager in Newcastle in the UK this week said she feared for her life when a prankster dressed as a clown chased her down the road.

Megan Bell, a 17-year-old student with a “life-long fear of clowns”, said she was walking home at around 8pm on Tuesday when she was confronted by a male in a costume and mask.

“I panicked. . . and just started to run in the opposite direction screaming and shouting. The clown chased after me for about 20 seconds.”

Schoolchildren across Newcastle have been targeted by people dressed in the costumes, apparently inspired by the developing craze in the US.

None were attacked or physically harmed, but police investigating the incidents said one teenager had been arrested in possession of a “bladed article”.

A spokesman said the arrest should “act as a clear warning to others who are actively seeking to cause distress and potentially harm others”.

“This behaviour will not be tolerated” a statement read.