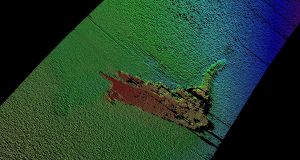 Image from a new underwater investigation at Loch Ness, showing a monster-shaped object that turned out to be a 1970s film prop. Photograph: Kongsberg Maritime/VisitScotland/PA Wire

Nessie hunters were left disappointed when monster remains uncovered at the bottom of Loch Ness turned out to be a film prop from the 1970s.

The 9m model is thought to have sunk after the shooting of The Private Life Of Sherlock Holmes, directed by Billy Wilder.

It was found on the loch bed during the latest survey of the 230m-deep stretch of water.

A marine robot named Munin is being used to explore areas that have not been reached before.

A spokesman for VisitScotland, which is supporting the project, said: “Operation Groundtruth has uncovered a recognisable creature.

“Although it is the shape of Nessie, it is not the remains of the monster that has mystified the world for 80 years, but a star of the silver screen.”

Christopher Lee starred in the 1970 film, where the monster in fact turned out to be a disguised naval submarine.

The prop is thought to have sunk after its humps were removed.

Other discoveries in Loch Ness have included a crashed second World War bomber, a 100-year-old fishing vessel and parts of John Cobb’s record attempt craft Crusader, which crashed at more than 322k/h in 1952.

In a further blow to monster hunters, early survey findings have revealed that claims made earlier this year about a “Nessie trench” in the northern basin of the loch are incorrect.

More precise underwater evidence shows there is no anomaly or abyss at the location.

The survey - the first of its kind in Scotland - is being carried out over two weeks by Kongsberg Maritime.

Loch Ness has been notoriously difficult to survey in the past due to its depth and steeply sloping side walls.

Munin can map vast areas to depths of 1,500m and has been used in the past to search for downed aircraft and sunken vessels.

Loch Ness project leader Adrian Shine said: “Because Munin can dive and navigate itself safely at great depth, it can approach features of interest and image them at extremely high resolution.

“We already have superb images of the hitherto difficult side wall topography and look forward to discovering artefacts symbolic of the human history of the area.”

Despite no conclusive evidence of the famed monster, the mystery and interest surrounding Nessie is worth millions to the Scottish economy, with hundreds of thousands of visitors travelling to Loch Ness every year in the hope of catching a glimpse.