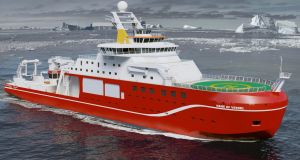 A campaign to name a polar research ship Boaty McBoatface may be heading for the rocks, after a UK government minister said he wanted something that “captures the spirit of scientific endeavour”.

Science minister Jo Johnson said that the public had come up with some “very imaginative” suggestions for names, which would all be “reviewed”. But his comment left no doubt that he does not regard himself as bound to follow the results of an internet poll.

RRS Boaty McBoatface was the runaway winner in the competition staged by the Natural Environment Research Council (NERC), taking 124,109 votes, ahead of RRS Poppy-Mai – named after a 16-month-old girl with terminal cancer – which came second with 34,371 votes.

They were followed by the more conventional RRS Henry Worsley, which commemorates the Antarctic explorer, with 15,231 votes; RRS It’s Bloody Cold Here with 10,679 votes, and RRS David Attenborough with 10,284 votes.

However, the £200 million research vessel is not guaranteed to be christened with the winning suggestion – that final decision lies with Mr Johnson.

And he appeared to suggest that the hopes of Boaty McBoatface fans may be sinking fast, telling the Daily Telegraph: “You won’t be surprised to know that we want something that fits the mission and captures the spirit of scientific endeavour. The public has come up with some fantastic and very imaginative suggestions. We are reviewing all of them.”

The NERC said the name of the new research vessel would be announced “in due course”.