Jaelyn Valenica arrived at 11.59pm and her brother Luis Valencia just after midnight 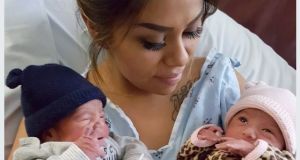 A woman in California has given birth to twins who arrived just minutes apart but in different years.

“We were actually watching the clock,” the children’s father, Luis Valencia, told NBC-affiliate KNSD. “We wanted to see if we were one of the first ones.”

“Maribel really wanted to have the babies on the same birthday, because you know later on in the years, they’re going to have a little confrontation and be like, ‘my birthday came first,’ so it means two birthday parties, back to back,” he added.

Valencia’s wife works as a cashier at the San Diego International Airport, and he’s a diesel mechanic for the Navy, KNSD reported. The couple’s new additions will join their older sister, 3-year-old Isabella.

The births occurred at the San Diego Kaiser Permanente Zion Medical Center, according to ABC News.

Both infants, who had not been expected to arrive until later this month, and their mother were reported to be doing well.

“It’s very unusual and it’s very special,” nurse Lynnette Coetzee told KNSD, “and I haven’t seen it in all my 34 years of nursing.”