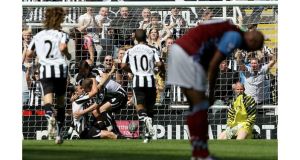 Six days after the Magpies’ return to Barclays Premier League began in sobering fashion with a 3-0 defeat at Manchester United, they hit hapless Villa for six without reply to claim the victory which will prompt Barton to shave off his much-ridiculed facial hair.

John Carew let the home side off the hook when he skied a 10th-minute penalty high over the bar, but Newcastle were far more clinical when they got the opportunity.

Carroll, watched by Alan Shearer, the man who wore the number nine shirt he has now inherited, stole the show with a fine treble after Barton had opened the scoring with a 12th-minute piledriver and Kevin Nolan had made it 2-0 with 32 minutes gone.

Nolan struck again at the death before Carroll claimed the match ball in injury time to round off an impressive display in front of a delighted crowd of 43,546.

The Magpies were handed a further boost at half-time when they announced the signing, subject to a work permit, of Ivory Coast international Cheick Tiote from Dutch club FC Twente.

But for managerless Villa, who ultimately sent the Magpies down in May last year, their trip to the north-east was little short of disastrous.

Newcastle boss Chris Hughton spent much of the summer acknowledging that this season would present far tougher challenges than last season’s Coca-Cola Championship romp, and his caveats were echoed by managing director Derek Llambias in his programme notes for the game.

Hughton, perhaps wary of the pace within the Villa ranks, once again fielded 21-year-old Carroll as a lone striker and charged skipper Nolan with the task of getting forward to support him.

With Stephen Ireland among their ranks for the first time on his 24th birthday, the visitors arrived having been installed once again as one of the candidates to push the big boys all the way, and their afternoon might have turned out differently had they taken the glorious opportunity which came their way with just 10 minutes gone.

Keeper Steve Harper was stunned to see referee Martin Atkinson pointing to the spot after Ashley Young had gone down as he attempted to round him.

Few inside St James’ Park expected anything other than Carew to ram the resulting spot-kick into the back of the net, but the striker blasted his effort high over the bar.

Just how costly the miss would prove became abundantly clear before half-time as the Magpies made the most of their great escape.

There were just two more minutes on the clock when Barton picked up the ball 30 yards out, made a little ground and steadied himself before smashing a dipping right-foot shot over Brad Friedel’s despairing dive.

The noise inside the stadium rekindled memories of loftier days on Tyneside, and there was even better to come.

Jose Enrique, who has spent the early part of the game trying to keep flying winger Marc Albrighton at bay and largely succeeding, got forward down the left and delivered an inviting cross to the back post for Carroll to head back towards Nolan.

The midfielder’s initial effort was parried by Friedel, but Nolan responded swiftly to head the rebound home from four yards.

Carroll did not have to wait long for his chance and when it arrived two minutes later, he was not found wanting.

Richard Dunne failed to clear Mike Williamson’s header back across goal from a Barton corner and the ball dropped perfectly for the striker to thump a left-foot drive home.

Villa left the field reflecting on a half during which they had enjoyed plenty of possession, but done too little with it, and on a defensive display which verged on the criminally negligent.

Newcastle returned in confident mood, but all the while aware that the visitors still represented a threat, although there was little evidence of that as the game approached the hour mark, prompting Emile Heskey’s arrival in place of Albrighton.

Indeed, the Magpies would have been further ahead with 62 minutes gone had Friedel not made a vital save from Wayne Routledge after Carroll and Nolan had combined superbly on halfway to play him in.

The respite was only temporary, however, and when Williamson helped the ball over the top into the penalty area five minutes later, Carroll lashed his second home from close range.

The whistle could not come soon enough for the visitors, but it did so only after Nolan had toe-poked home a fifth and Carroll had completed his hat-trick from substitute Xisco’s pass on a remarkable afternoon on Tyneside.