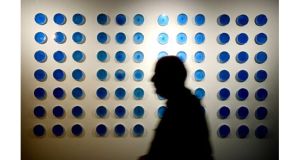 Take some spinning discs, add a chamber that approximates living inside someone’s mouth and toss in a couple of beating pig hearts and you have Oscillator, the latest exhibition at the Science Gallery at Trinity College Dublin.

The exhibition is all about oscillation, patterns of movement, vibrations and cycles that arise naturally or through the application of science. !The idea is investigating the oscillations seen in every part of life and the world," said co-curator Dr Stefan Hutzler.

Electromagnetic radio waves are converted into sound to become air waves we hear. Oscillations are created by earthquakes, or those seen in the stock market, he said. "Even if you go down to the molecular level, atoms are described by wave function."

As ever the exhibition is very hands-on with visitors able to interact with the displays, for example swinging weights in a giant Newton's Cradle. All of us have tried spinning a coin on a tabletop but what if the coin weighed four kilos? It is a totally different experience with a faster spin and much more sound.

Then there is a "rattleback" a toy known for the past 2,000 years, said Dr Hutzler who co-curated the exhibition with Douglas Repetto. Spin it one way and it will cooperate, spin it the other and it will first comply then stop and begin revolving in the other direction.

Visitors are encouraged to climb into the 'Mouth Tank' to see what it might sound like if you were installed in someone’s mouth. The show stopper however will undoubtedly be 'The Body is a Big Place', a display that features two beating pig hearts.

Artists, scientists and clinicians developed a system that can support fresh pig hearts recovered from an abattoir. Tonight two pig hearts will be installed, and when warmed by heated, oxygenated fluid that carries nutrients the hearts will spontaneously beat for some time. This in turn will be videoed and for the remainder of the exhibition will be played back for visitors.

Support for the exhibition comes from Science Foundation Ireland. It opens to the public tomorrow, Friday, and will run for two months. There will be presentations and talks over the run, with more information available on http://sciencegallery.com/events